The temple that the Greeks called the Memnonium in Abydos, actually dedicated to Seti I, Osiris and Isis along with Ptah, Ptah-Sokar, Nefertem, Re-Horakhty, Amun, and Horus, is one of the major archaeological sites in that region. It was begun by Seti I and finished by his son, the great Ramesses II. In fact, this structure built of fine white limestone is actually one of the most impressive religious structures in Egypt.

The present facade of the Temple was once the backdrop to the second of the two courtyards, the first of which, along with its entrance pylon, have long since fallen into ruin.

The temple, in the shape of an L, once had a landing quay, a ramp, a front terrace, two pylons, though the outer one is mostly lost, with two courts and pillared porticoes, followed by two hypostyle halls and seven chapels, with additional chambers to the south making up the short leg of the L. Storage chambers fill the area from the southern wing to the front of the temple. The main body of the temple was symmetrical back to the seven chapels. While the L shaped floor plan of this temple is unusual, analysis seems to show that the southern wing was no afterthought, but the result of a well thought out alternative to the usual axial temple plan. 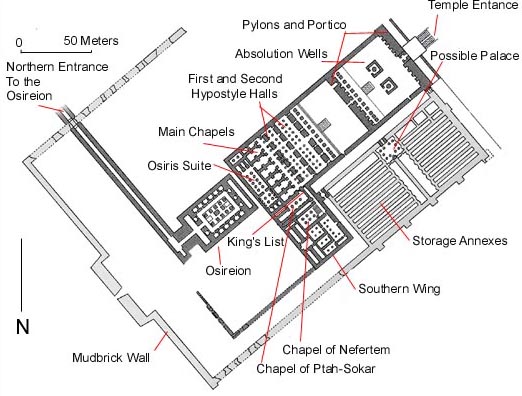 Ground Plan of the Main Seti I Temple (L Shaped)

One approaches the temple through its outer courts, now ruined but with the huge tanks for the absolution of the temple’s priest still visible. This was the first temple we know of in Egypt that incorporated these structures. Along the way there are also row upon row of mud brick storage annexes grouped around a stone entrance hall.The access to the temple proper is up a long flight of 42 shallow stairs

The outer pylons and courts, as well as the first hypostyle hall which is relatively shallow and has two rows of twelve columns with lotus bud capitals, were hastily completed and decorated by Ramesses II. In fact, an image of him worshipping his father, along with Osiris and Isis is incorporated into the initial decorations. Most of the decorations completed by Ramesses II are inferior to those done during his father’s reign, but some are interesting and noteworthy, including the depiction of him as a young boy roping a bull with his father (elsewhere in the temple). Here, we also find a number of military scenes (second courtyard). Within the first hypostyle hall, it is interesting that Ramesses II placed decorations over those of his father. Within the portico that leads to the hypostyle halls, there was once seven doors that gave way to seven processional paths through the towering clustered columns to seven chapels at the rear of the temple.

Even though Seti’s place in history was overshadowed by his son, Ramesses II , arguably one of the greatest pharaohs in Egyptian history. Yet, Seti was an important character in his own right, as he was one of the pharaohs who had to bring order back to Egypt and re-establish Egyptian sovereignty over its eastern neighbours (Syria and the Levant) following the social disruption caused of Akhenaten’s religious reforms . Seti was also responsible for commissioning the construction of a grand temple in Abydos. 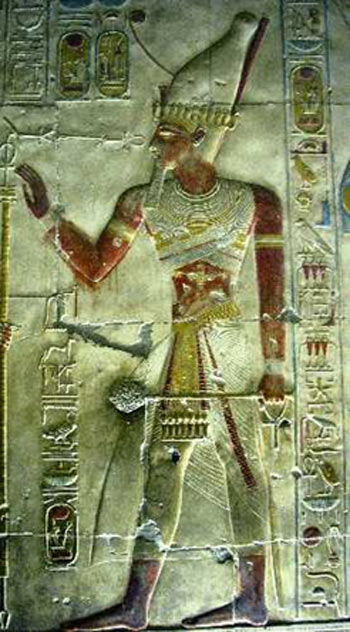 rving of Seti I in the Temple of Seti, Abydos (Image: Wikipedia)

Abydos has a special place in the sacred landscape of ancient Egypt, as it was believed to be the place where Osiris was buried. Thus, Abydos was an important cult centre for Osiris. A number of temples dedicated to Osiris, all of which were located in one area, were built prior to the reign of Seti. The Temple of Seti, however, was built on new ground to the south of the said temples.

Seti’s temple was built mainly of limestone, though parts of it were built in sandstone. Although work began under Seti, the temple was only completed during the reign of his son, Ramesses II. This is visible in some of the temple’s reliefs depicting Ramesses slaying Asiatics and worshipping Osiris. Like the temples of his predecessors, Seti’s temple was dedicated to Osiris, and consisted of a pylon, two open courts, two hypostyle halls, seven shrines, each to an important Egyptian deity (Horus, Isis, Osiris, Amun-Ra, Ra-Horakhty and Ptah) and one to Seti himself, a chapel dedicated to the different forms of the god Osiris, and several chambers to the south. In addition to the main temple, there was also an Osireion at the back of it. Various additions to the temple were made by later pharaohs, including those from the Late, Ptolemaic and Roman periods.

The Temple of Seti played an important role in his family’s claim as a legitimate royal household. Prior to the ascension to the throne by Seti’s father, Ramesses I, Seti’s ancestors were merely warriors, generals at most. Without royal blood in his veins, Seti had to consolidate his position, and one of the ways to do so was to build temples. As Akhenaten’s religious reforms did away will the old gods, Seti’s dedication of his temple to Osiris and other important Egyptian deities symbolised a return to the traditional way of life, thus allowing himself to be seen as a restorer of order. 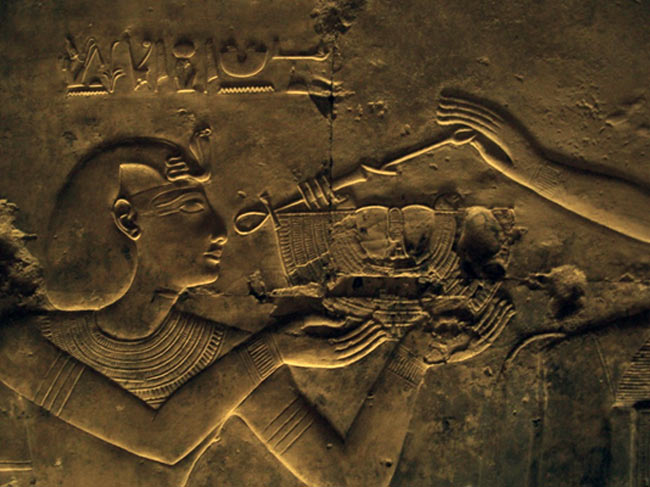 Seti I offering a menat up to a deity and receiving the djed and ankh in return. (Credit: Kyera Giannini / flickr)

In addition to the worship of Egypt’s traditional gods, Seti’s temple had another feature that made his rule legitimate. This was the Abydos King List, which was found carved on a wall of the temple. The Abydos King List contains the names of 76 kings of ancient Egypt, predecessors whom Seti acknowledged to be legitimate pharaohs. On the other hand, earlier rulers who were considered illegitimate, such as Hatshepsut and Akhenaten were conveniently omitted from the List. The Abydos King List was arranged in three rows, each containing 38 cartouches. Whilst the first two rows consisted of the names of his predecessors, the third row is just a repetition of Seti’s throne name and praenomen.

Apart from being an important legitimising tool for Seti’s dynasty, the Abydos King List was also an incredibly important document for our understanding of the kings of ancient Egypt, especially those from the Old Kingdom and the First Intermediate Period. Although the List provides the order of the Old Kingdom rulers, it is far more valuable for the fact that it is the only known source for the names of many of the kings from the first two dynasties of the First Intermediate Period (Dynasties 7 and 8).

The Temple of Seti at Abydos was a strategic building project on the part of Seti I in order to bolster his family’s claim to the Egyptian throne. This desire for legitimacy has also indirectly benefitted us today, as Seti left behind a list of kings that helped patched some holes in the history of Egyptian kingship, as well as a spectacular monument that continues to be visited by thousands of people every year.