Temple of Rameses II – Sohag, Abydos. About 300m from Seti I’s temple at Abydos, on the western edge of the village of Beni Mansur, Rameses II built an another temple for himself. This was also dedicated mainly to the Osirian cult but was a more conventional design than his father’s temple. It was built when he was still co-ruler with Seti I. The walls of the temple of Rameses are very reduced, now only about 2m high, but the plan of the structure is still plain to see. The temple’s greatest attraction is the brilliantly coloured painted reliefs which are possibly the finest in any monument built by Rameses II. 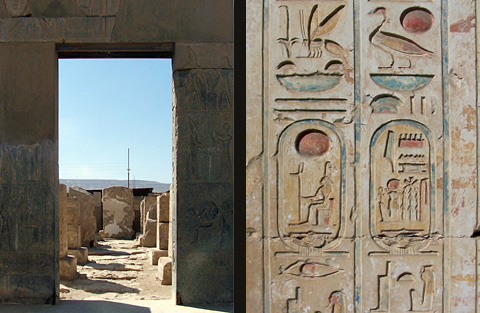 The walls of the temple are built of limestone, with sandstone pillars. The first pylon and court are now ruined and the pink granite portal leads straight into a second court surrounded by a colonnade of Osirid pillars on its north, east and south sides. None of the pillars is preserved to their full height and the engaged Osirid statues of the king all lack their heads and shoulders. The north wall of the court depicts processions of priests and offering bearers with a decorated bull and gazelles, as well as soldiers, Libyans and negroes. Also on the north wall there are some interesting graffiti. Some ancient amateur artist incised an image of the god In-hert and a painted priest before him bears the inscription ‘Djed-Iah, the justified, wab-priest of Osiris, Djedi-ankh-f’.

At the back of the court on the western side is a raised portico with two chapels dedicated to Seti I and the king’s deified ancestors on the left and two chapels to the nine gods of the Ennead and Rameses II (and Osiris Khenty-Amentiu) on the right. The shrine of the ancestors once contained a table of kings on its north wall, part of which (the ‘Second Abydos List’) is now in the British Museum.

On the north wall of the portico, Rameses carved nine name-rings of the Asiatic tribes he conquered. A magnificent highly polished black granite gateway, 5m tall and decorated with scenes and inscriptions, which has been restored in the centre of the portico leads us into the first hypostyle hall.

The first hypostyle was decorated while the young Rameses was still his father’s co-ruler though his cartouches were later altered to contain his own pharaonic titles. Eight rectangular pillars supported the roof which is now missing. The decoration of the hypostyle is similar to that in the court and portico, but has a brightly coloured dado on its lower walls depicting the Nile gods. These are painted in different colours; red represents the Nile at inundation, blue represents winter and green, summer. At the western end of the hall’s south wall, a narrow staircase ascended to the roof, though there are now only 12 stairs remaining. 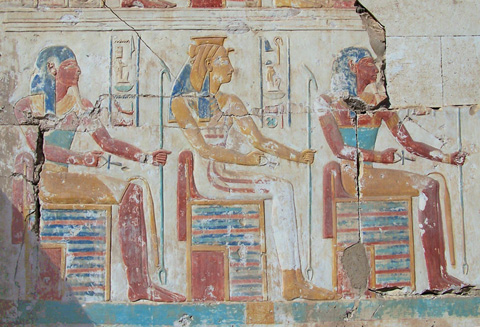 The second hypostyle contains eight sandstone pillars with three chapels on each of the north, west and south sides. The northern chapels are dedicated to Thoth, Min and Osiris. The southern chapels are very badly damaged but it is thought that the central one was dedicated to Osiris with a clothing room where the god’s daily garments were stored. The chapels on the western side of the hall were dedicated to Amun-Re, Osiris and possibly Horus. In the latter shrine on the north wall there is a colourful relief of the goddess Hekat ‘Mistress of Abydos’, usually portrayed as a frog, but in this case showing her human face. Next to her the god Anubis ‘Lord of the Sacred Land’ also has the head of a man rather than the usual jackal. This is the only known example of Anubis with a human head.

The Central shrine on the western side of the hypostyle is the ‘alabaster’ sanctuary of Osiris where we can see a restored statue group in grey granite which was brought from another location in the temple and depicts (probably) Osiris, Isis, Horus, Seti I and Rameses II.

In the corners of the western wall at the north and south are two chambers thought to be statue halls which also have some very colourful reliefs. The each contain decorated niches and the southern chamber has a beautiful relief of Rameses offering to Osiris who is being protected by a winged djed pillar. This is thought to be one of the earliest representations of a symbol which became popular in later dynasties.

Only the lower parts of the exterior walls still exist and the northern and western walls bear a version of Rameses’ Battle of Kadesh in beautiful incised relief, though not as complete as in some of his later monuments. On the southern exterior wall there is the lower part of a calendar of feasts which lists offerings provided by the royal endowment to be presented on the days of the festivals. Beneath this Rameses describes his temple and seems to be accurate in what remains of the text. He describes a pylon of white limestone, granite doorways and a sanctuary of pure alabaster which must have been very beautiful in its time.