The Temple of Kom Ombo is an unusual double temple in the town of Kom Ombo in Aswan Governorate, Upper Egypt. It was constructed during the Ptolemaic dynasty, 180–47 BC. Some additions to it were later made during the Roman period. The building is unique because its ‘double’ design meant that there were courts, halls, sanctuaries, and rooms duplicated for two sets of gods. The southern half of the temple was dedicated to the crocodile god Sobek, god of fertility and creator of the world with Hathor and Khonsu. Meanwhile, the northern part of the temple was dedicated to the falcon god Haroeris, also known as Horus the Elder, along “with Tasenetnofret (the Good Sister, a special form of Hathor or Tefnet/Tefnut) and Panebtawy (Lord of the Two Lands).” The temple is atypical because everything is perfectly symmetrical along the main axis. 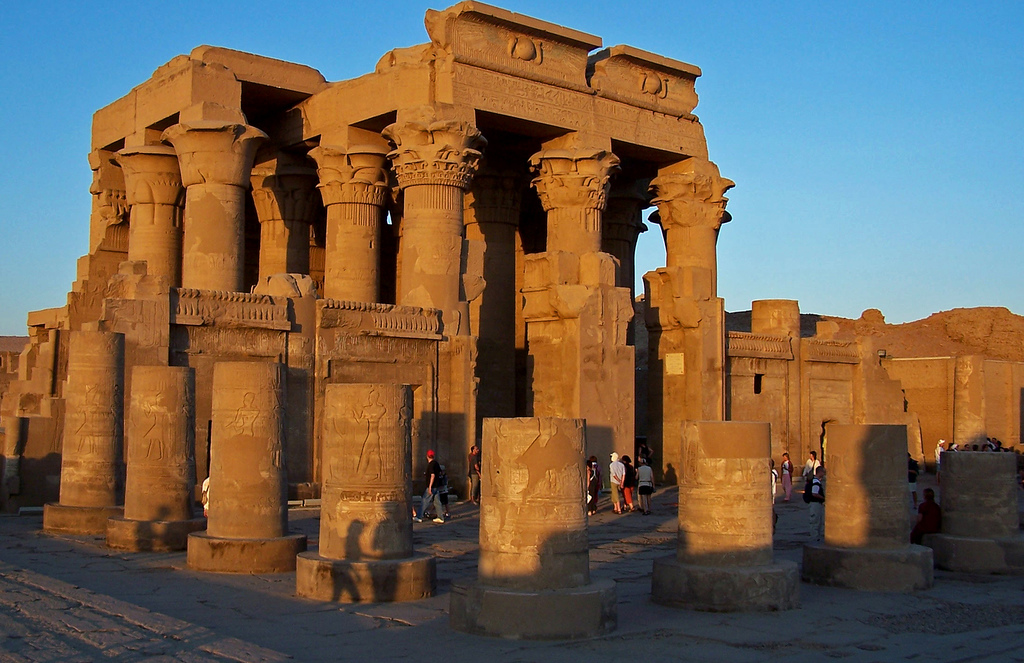 The texts and reliefs in the temple refer to cultic liturgies which were similar to those from that time period. The temple itself had a specific theology. The characters invoked the gods of Ombos and their legend. Two themes were present in this temple: the universalist theme and the local theme. The two combine to form the theology of this temple. The temple was started by Ptolemy VI Philometor (180–145 BC) at the beginning of his reign and added to by other Ptolemys, most notably Ptolemy XIII (51–47 BC), who built the inner and outer hypostyle halls. The scene on the inner face of the rear wall of the temple is of particular interest, and “probably represents a set of surgical instruments.” A temple was already built in the New Kingdom to honor these gods, however, this site gained in importance during the Ptolemaic Period. Little remains of the New Kingdom temple. Much of the temple has been destroyed by the Nile, earthquakes, and later builders who used its stones for other projects. Some of the reliefs inside were defaced by Copts who once used the temple as a church. All the temples buildings in the southern part of the plateau were cleared of debris and restored by Jacques de Morgan in 1893.

A few of the three hundred crocodile mummies discovered in the vicinity are displayed in The Crocodile Museum.

The Name “Kon Ombo”, and History

The word “Kom” in Arabic means the small hill and the word “Ombo”, in the Hieroglyphic ancient Egyptian language, means the gold. Therefore, the word Kom Ombo, as a whole, means the hill of the gold.

The word Ombo was actually originated from the Pharaonic word “Nbty” which is an adjective derived of the word Nebo that meant gold. During the Coptic period, the word was slightly changed to become Enbo and when the Arabic language became common in Egypt, the word became “Ombo”.

Although Kom Ombo is famous today due to the Temple that was constructed during the Greco Roman era, the area was inhabited since the pre-dynastic period of the Egyptian history and many ancient burial sites were discovered in and around Kom Ombo.

The name of the town; Kom Ombo, or the hill of the gold clarifies how important it was for the ancient Egyptians from the economical aspect, despite the fact that the town never really flourished except when the Ptolemies took control of Egypt.

The Ptolemies have constructed many permanent military bases in the area situated on the Red Sea. This developed the commercial activities between the town located near the Nile and these bases, especially Kom Ombo which was a transit point where many trading caravans used to stop.

The most glorious days of Kom Ombo came when the Romans ruled over Egypt as it became the capital and the administrative center of the province and during this period a large portion of the Temple of Kom Ombo was constructed and many other sections were restored and renovated.

The Temple of Kom Ombo, which we view today and was built during the Greco Roman period, was constructed on the ruins of a much older temple which was called “Ber Sobek” or the house of the god Sobek.

This older temple was erected during the reigns of King Tuthmosis III and then during the ruling period of Queen Hatshepsut, whose marvelous temple is still standing in the West Bank of Luxor, and both belonged to the 18th dynasty of the New Kingdom.

A large portion of the Temple of Kom Ombo, including the hypostyle hall, was constructed during the reign of Emperor Tiberius, from the year 81 till 96 BC. The buildings work of the temple went afterward for more than 400 years during the ruling period of Emperors Caracalla and Macrinus till the middle of the 3rd century AD.

The Ptolemies have constructed the Temple of Kom Ombo for the worship of two gods, Sobek; the Crocodile god, and Horus, the falcon god. This is why the complex mainly consists of two parallel temples with all the traditional components of such ancient Egyptian religious structures are present in the two temples.

The Temple of Kom Ombo was constructed mainly with limestone in the shape of a rectangle, with a plan and a design which is quite similar to many temples constructed in the Greco Roman period like the Temples of Dendara and Philae which are considered among the most important monuments in Upper Egypt, visited by numerous tourists.

The design of the Temple of Kom Ombo starts with a front courtyard, a hypostyle hall following it, three inner halls, and then two sanctuaries; one dedicated to Sobek and the other to Horus.

Description of the Temple

A set of steps lead from the ground to the gate of the temple, which consists of a large structure made of blocks of stones. The façade of the Temple of Kom Ombo has some of the wonderful wall carvings of the Ptolemaic kings beating the enemies and presenting the offerings to the gods.

After passing through the gate of the temple, the guest enters the hypostyle hall, constructed in the Roman period, which is largely ruined and damaged due to several reasons with time passing by.

The courtyard of the temple consists of a rectangle open space with sixteen columns surrounding the courtyard from three directions. Unfortunately, only the bases of these columns survived until today with some of the capitals that were located at the top of the columns.

After the courtyard, the guests enter the first inner hall that was constructed during the ruling period of Ptolemy XII. To the East of this hall, there are many portraits of the Ptolemies being purified by the gods Sobek and Horus, in a scene that would be found in other temples like the Edfu and Philae.

The inner hall of the Temple of Kom Ombo has a design which is similar to the outer hall but the columns here are quite shorter and the stone capital of these columns have the shape of the lotus flower, one of the most important and sacred plants in ancient Egypt.

The Temple of Kom Ombo is featured for having two sanctuaries dedicated to the two gods of the temple; Sobek and Horus. The two sanctuaries consist of two similar rectangle halls which are considered to be among the most ancient sections built in the temple as they were constructed during the reign of Ptolemy VI.

The birthplace of the Temple of Kom Ombo is located in the South Eastern section of the complex and it was constructed during the period of Ptolemy VII. This structure consists of an outer courtyard that leads into a front hypostyle hall that leads in turn to another two halls where rituals of the birth of the son of the gods were carried out.

The Chapel of Hathour is located in the North Eastern section of the Temple of Kom Ombo and it consists of a rectangle shaped chapel constructed higher than the ground and reached through climbing some steps. The chapel is 5 meters long and 3 meters wide.

Inside the chapel of Hathour, there are three glass galleries that display three mummies of crocodiles representing the god Sobek. The façade of the chapel has a portrait displaying Hathour sitting in front of the entrance. 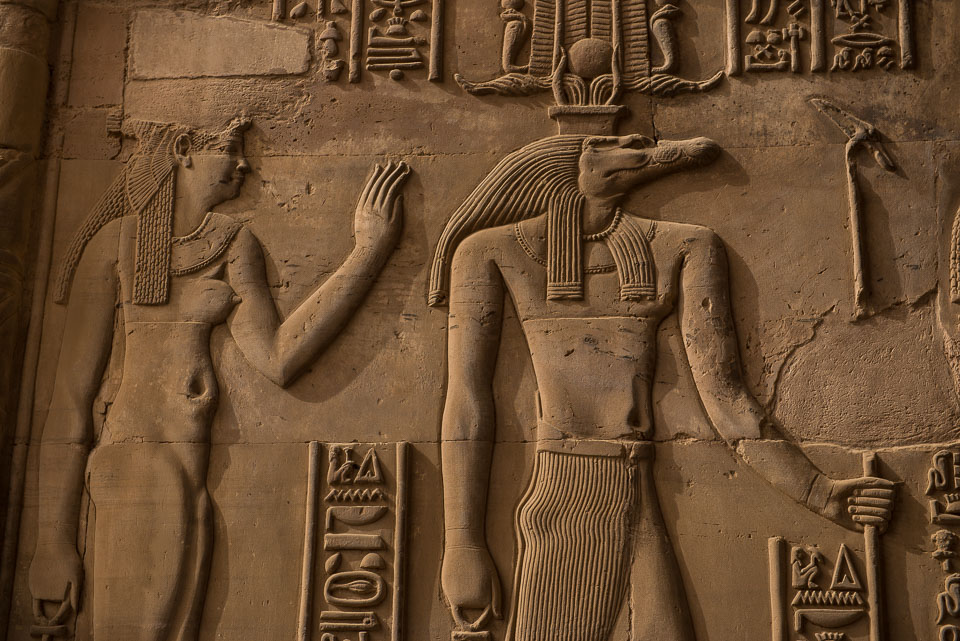 Situated in the North Eastern section of the temple of Kom Ombo, a Roman-style chapel constructed in the 3rd century AD was dedicated to the god Sobek.

Emperor Caracalla is portrayed on two columns that dominate the entrance into the chapel that hosts many portraits of the god Sobek, which was worshiped by many Egyptians during the Ptolemaic and Roman periods.

History and Secrets of Egyptian Mummification