Ankhkheperure Smenkhkare Djeser Kheperu (sometimes spelled Smenkhare, Smenkare or Smenkhkara) was a short-lived pharaoh in the late 18th dynasty. His names translate as ‘Living are the Forms of Re’ and ‘Vigorous is the Soul of Re – Holy of Forms’. His reign was during the Amarna Period, a time when Akhenaten sought to impose new religious views. He is to be distinguished from his immediate predecessor, the female ruler Ankhkheperure Neferneferuaten (usually identified as Nefertiti). Unlike Neferneferuaten, Smenkhkare did not use epithets in his royal name or cartouche. 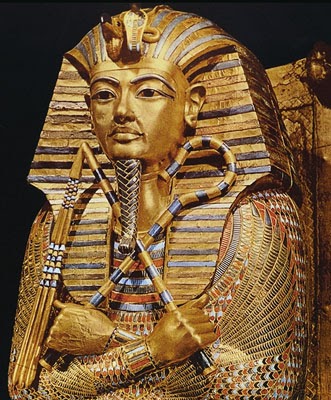 Very little is known of Smenkhkare for certain because later kings, beginning with Horemheb, sought to erase the entire Amarna Period from history.

Smenkhkare was known as far back as 1845 from the tomb of Meryre II. There he and Meritaten, bearing the title Great Royal Wife, are shown rewarding the tomb’s owner. The names of the king have since been cut out but had been recorded by Lepsius circa 1850.

Later, a different set of names emerged using the same throne name: “Ankhkheperure mery Neferkheperure [Akhenaten] Neferneferuaten mery Wa en Re [Akhenaten]”. This led to a great deal of confusion since throne names tended to be unique. For the better part of a century, the repetition of throne names was taken to mean that Smenkhare changed his name to Neferneferuaten at some point, probably upon the start of his sole reign. Indeed, Petrie makes exactly that distinction in his excavation notes of 1894.

Akhenaten’s nominal successor was Smenkhkare, probably a younger brother of the king, but it appears that they may have died within months of each other. Smenkhkare’s two-year reign was in reality a coregency during the last years of Akhenaten’s life. A graffito in the tomb of Pairi at Thebes (TT 139) records a third regnal year, and there are indications that Smenkhkare was preparing the ground for a return to the old orthodoxy and had left Akhetaten. He was married to Merytaten, the senior heiress of the royal blood line, but she seems to have predeceased him. Her sister Ankhesenpaaten thus became the senior survivor of the six daughters – having herself borne a small daughter by Akhenaten, named after her – and was married to the young Tutankhaten, the heir apparent (who was later to change his name to Tutankhamun).

They show the last appearance of the royal family as a whole (that is: Akhenaten and his chief-queen Nefertiti, together with their six daughters), which scholars have dated to their satisfaction. These scenes are the first dated occurrence of the latter name-forms of the Aten. After this date, the events at Amarna and their chronology become far less clear. It is only with the accession of Tutankhamun, and the restoration early in this king’s reign, that events appear to become clear again.

A scene from the tomb of Meryre II, depicts pharaoh Smenkhkare and his Great Royal Wife Meritaten handing out tribute from the “window of appearances”. The inscription was recorded upon discovery, but has since been lost. 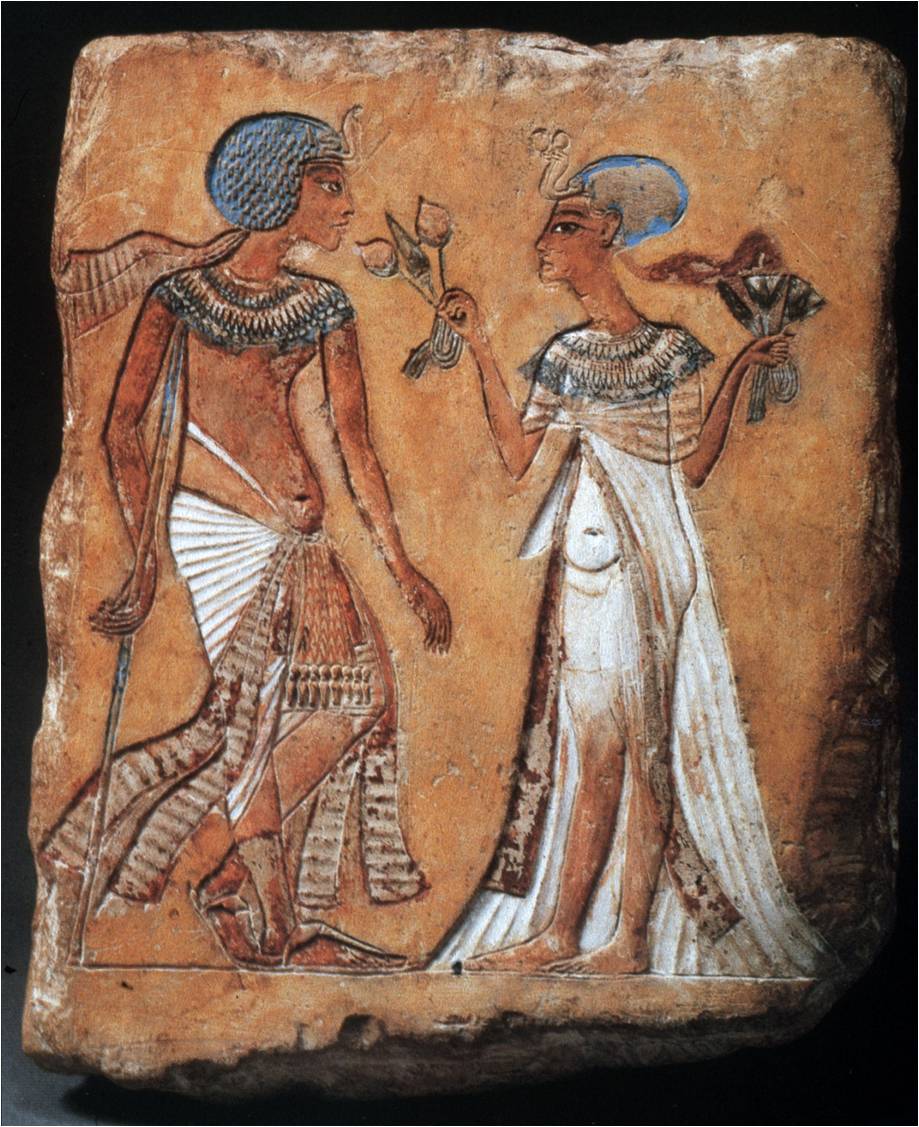 This image is commonly taken to be Smenkhkare and Meritaten, though it may be Tutankhaten and Ankhesenpaaten. Image: wikipedia

It is in this late Amarna period that Akhenaten’s co-regent and probable immediate successor comes to the fore. Akhenaten is generally assumed to have died in the late autumn of his 17th regnal year (after the bottling of wine in that year). Nefertiti disappears from view somewhat earlier (around regnal year 14); the reasons for this are unclear and under scholarly debate (see below). Around the same time a new co-regent is first attested.

Many of the questions surrounding Akhenaten’s co-regent and successor revolve around the names attested for this individual (or individuals). Two closely similar, yet distinct sets of names, appear in the records available for the late Amarna period. These are:

Both these sets are written in two cartouches. The epithets in the former name-set are “desired of Neferkheprure/Waenre” (i.e. Akhenaten). The first set of names also sometimes appears in feminine form as “Ankhetkheprure Neferneferuaten” and sometimes the epithet for the nomen is then replaced by “beneficial to her husband”. The former set of names appears to be earlier, and the association of these names with Akhenaten seems more substantial than is the case for the latter set. Both names are associated with Meritaten as great royal wife.

Both sets of names are only poorly attested. To date, no objects other than a wine jar label and six royal seals bearing the names of Ankhkheprure Smenkhkare Djeserkheperu are known. Only one named-depiction of Smenkhkare along with Meritaten (in the tomb of Meryre II) is known. Some objects with the names of Ankhkheprure Neferneferuaten were reused in the burial of Tutankhamun (see below), and the female variant of these names appears on faience-ring bezels.

Because of the presence of the feminine Ankhetkheperure Neferneferuaten, scholars have generally dropped the old view that there was only one, male individual involved. The theory used to suggest he first acted as Akhenaten’s co-regent under the name Ankhkheperure Neferneferuaten and, after the death of Akhenaten, succeeded him under the name Ankhkheperure Smenkhkare.

Several theories have been proposed to accommodate a woman:

It must be noted there is disagreement as to which names belong to each individual.

The mystery of Tomb 55 in the Valley of the Kings

A great deal of controversy surrounds the question of Smenkhkare’s mummy and burial. In January 1907, Edward Ayrton (working for Theodore Davis) discovered the badly water-damaged contents of an unfinished tomb in the Valley of the Kings (KV 55). Arguments have raged ever since over the identity of the occupant of the rishi-type coffin, because the cartouches on it had all been hacked out. Initially Davis believed he had found the tomb of Queen Tiy – the damaged body being identified as female – and published it as such.

Subsequently, the body changed sex and was identified as Akhenaten, the previously thought female characteristics of the skeleton being paralleled with those of Akhenaten’s portrayals, especially the pelvic area. More detailed forensic examination, however, now suggests that the body belonged to Smenkhkare, and serological examination (blood grouping) of tissue, as well as close skull measurement comparisons, indicate that the occupant was a brother, or possibly half-brother, of Tutankhamun – the entrance to whose tomb (KV 62) is a mere 15 yards (13.7 m) away across the Valley floor.

At one time, it appears that there were three bodies in the tomb. One of them was that of Queen Tiy, and parts of her great gold overlaid wooden sarcophagus shrine were found there. Her body was probably taken from here round into the West Valley to join her husband, Amenhotep III, in KV 22 (p. 119). Four alabaster canopic jars with finely carved female heads wearing the characteristic court wig of the period were found in the tomb; they show evidence of having been adapted by the addition of a royal uiaeus to the brow which was subsequently broken off. Unfortunately they are uninscribed, but were presumably en suite with the coffin. It has been suggested that the canopic lids are portraits of Kiya, a hitherto obscure junior queen of Akhenaten.

The cartouches on the coffin had all been deliberately hacked out, literally to deny the occupant access to the next world because loss of name was a terrible thing. The texts still in place, however, had feminine endings to the appropriate words, indicating that the coffin had been made for a royal female. This was thought possibly to have been Merytaten, Smenkhkare’s wife, or now, Kiya. The cartouches, it was suggested, had been hacked out because the perpetrators believed that the occupant was the hated Akhenaten (his could have been the third body in the tomb at the time).

It seems that they hoped to remove the bodies of Queen Tiy and Smenkhkare from the contamination of association with the heretic king Akhenaten, but made a mistake and removed Akhenaten’s body instead. On that basis, somewhere in a small undiscovered tomb or cache in or near the Valley of the Kings, Akhenaten’s body may still lie undisturbed. It will be accompanied by whatever of Smenkhkare’s funerary equipment was removed from Tomb 55, and that should include ushabti figures for Smenkhkare because, although examples are known for the rest of the royal family, not even a fragment of one survives bearing his name.