The latest tourist attraction at the Luxor Temple in Luxor, Egypt, is a towering statue of Ramses II, now fully restored for the first time since it’s 1958–60 discovery, when it was found in 58 pieces. The massive work measures 36 feet tall and weighs 82 tons.

The black granite statue, which depicts the third pharaoh of the Nineteenth Dynasty of Egypt, was damaged during an earthquake in the fourth century. The unveiling of the restored colossus took place the evening April 18, just after Egypt announced the discovery of the 3,500-year-old tomb of the nobleman Userhat. 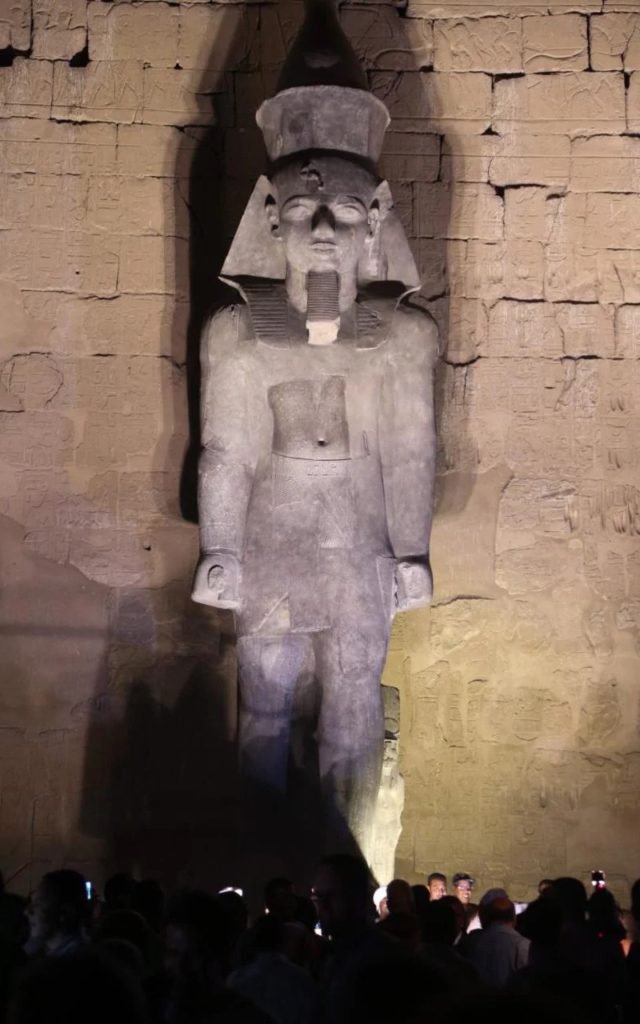 “There are 10 coffins and eight mummies. The excavation is ongoing,” Mostafa Waziri, head of Luxor Antiquities, told Agence France Presse of the new discovery. The tomb contains more than 1,000 funerary statues. The coffins, some of which were added some 500 years after the tomb was initially built, are said to be mainly well-preserved.

A dramatic floodlit ceremony served to debut the Ramses statue in front of the walls of the Luxor temple on the bank of the Nile River.

Also known as Ramses the Great or Ozymandias, as immortalized in the Percy Bysshe Shelley poem, Ramses II ruled from 1279–1213 BC, and was known for his building projects and successful military expeditions. His statue at Luxor would have originally stood alongside five others in front of the temple’s first pylon, or two-towered gateway.

Restoration work on the statue began in November 2016. It was first discovered by an archaeological team led by Mohamed Abdel-Qader. 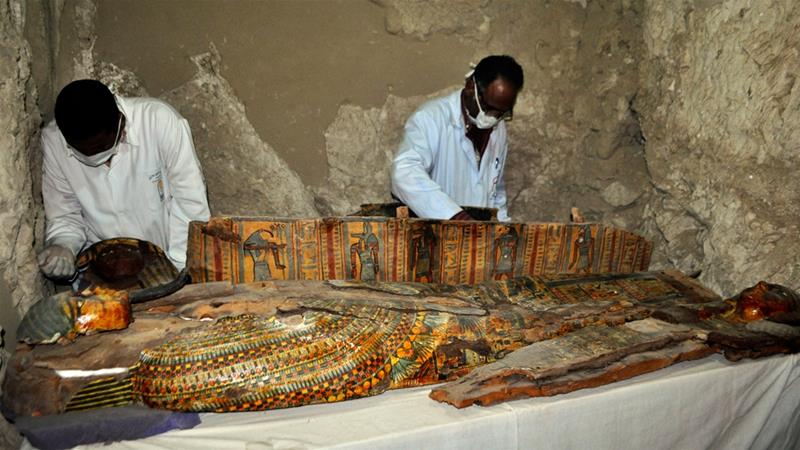 Members of an Egyptian archaeological team work on a wooden coffin discovered in a 3,500-year-old tomb in the Draa Abul Nagaa necropolis, near the southern Egyptian city of Luxor, on April 18, 2017. Egyptian archaeologists have discovered six mummies, colorful wooden coffins and more than 1,000 funerary statues in the 3,500-year-old tomb, the antiquities ministry said. Courtesy of Stringer/AFP/Getty Images.

“What we’re happy with is that (the kind of tourists drawn to) classical Egypt, Luxor, Aswan, Nile cruises… are back to normal levels again,” Hisham El Demery, chief of Egypt’s Tourism Development Authority, told Reuters. His optimism comes despite an ISIS attack this week near St. Catherine’s Monastery in Sinai that killed a police officer and wounded four.