The valley of the Kings; Once part of the ancient city of Thebes is the burial site of almost all of Egypt’s Pharaohs from the 18th, 19th and 20th dynasties. Archaeologists have found around sixty-three tombs (with the latest discovery being in 2008) at this burial complex located in the hills of Dayr- al-Bahri.

Even though most of the tombs that are located in this valley have been robbed and luted the remains of these ancient burial sites give archaeologists and historians an estimate of the power of ancient Pharaohs and noblemen. This archaeological site has been the center of attention for researchers since the eighteenth century and even today scholars rush to ancient Thebes to study and explore the history behind one of the most important locations in ancient Egypt.

The Facts and History

Nefertari, also known as Nefertari Meritmut, was an Egyptian queen and the first of the Great Royal Wives (or principal wives) of Ramesses the Great. Nefertari means ‘beautiful companion’ and Meritmut means ‘Beloved of [the goddess] Mut’. She is one of the best known Egyptian queens, next to Cleopatra, Nefertiti, and Hatshepsut. She was highly educated and able to both read and write hieroglyphs, a very rare skill at the time. She used these skills in her diplomatic work, corresponding with other prominent royals of the time. Her lavishly decorated tomb, QV66, is one of the largest and most spectacular in the Valley of the Queens. Ramesses also constructed a temple for her at Abu Simbel next to his colossal monument there. 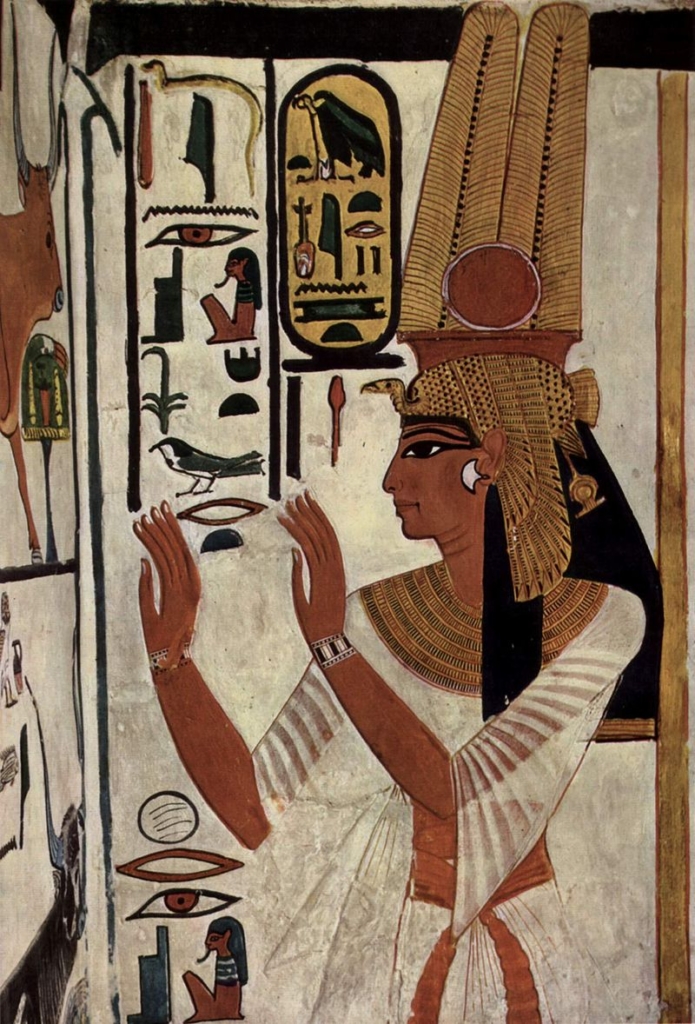 Nefertari held many different titles, including: Great of Praises (wrt-hzwt), Sweet of Love (bnrt-mrwt), Lady of Grace (nbt-im3t), Great King’s Wife (hmt-niswt-wrt), his beloved (hmt-niswt-wrt meryt.f), Lady of The Two Lands (nbt-t3wy), Lady of all Lands (hnwt-t3w-nbw), Wife of the Strong Bull (hmt-k3-nxt), god’s Wife (hmt-ntr), Mistress of Upper and Lower Egypt (hnwt-Shm’w-mhw). Ramesses II also named her ‘The one for whom the sun shines’. 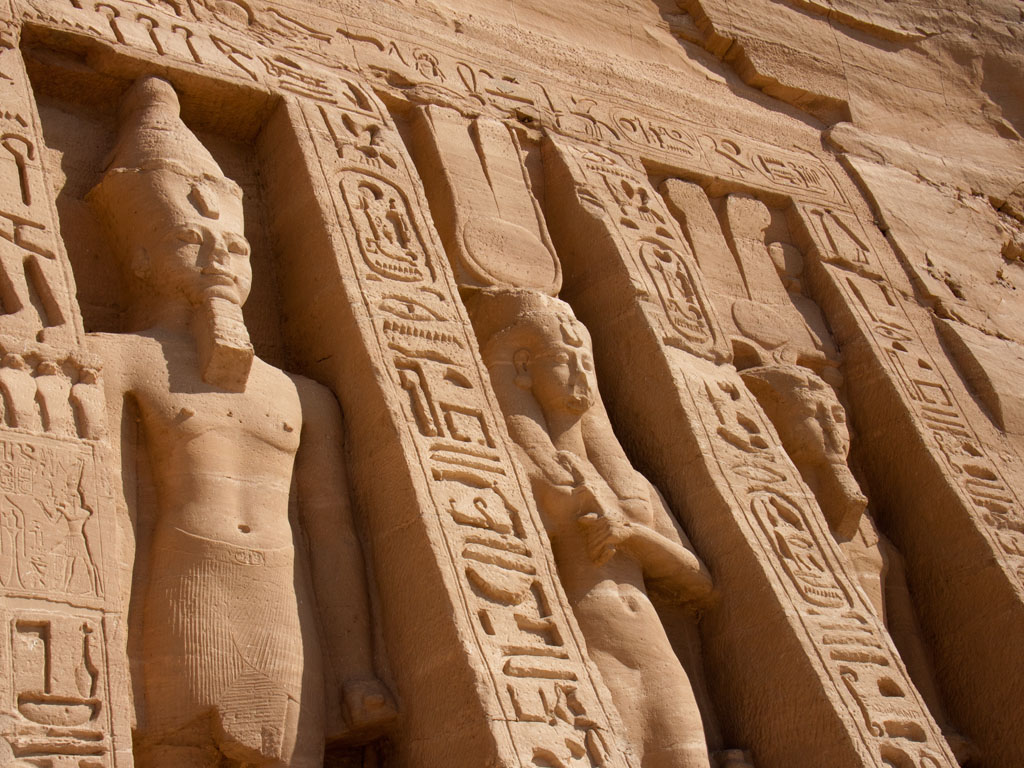 Outside of Temple of Queen Nefertari

Nefertari, or Beautiful Companion, was the first and most beloved of the wives of Ramses 11. Indeed, her form is slim and graceful, and she is extremely fair. Since her magnificent tomb in the Valley of the Queens at Luxor is closed to the general public, we are fortunate that we can see her depicted in her temple at Abu Simbel. It lies to the north of the great temple of Ramses II and is dedicated to Nefertari and to the goddess Hathor. 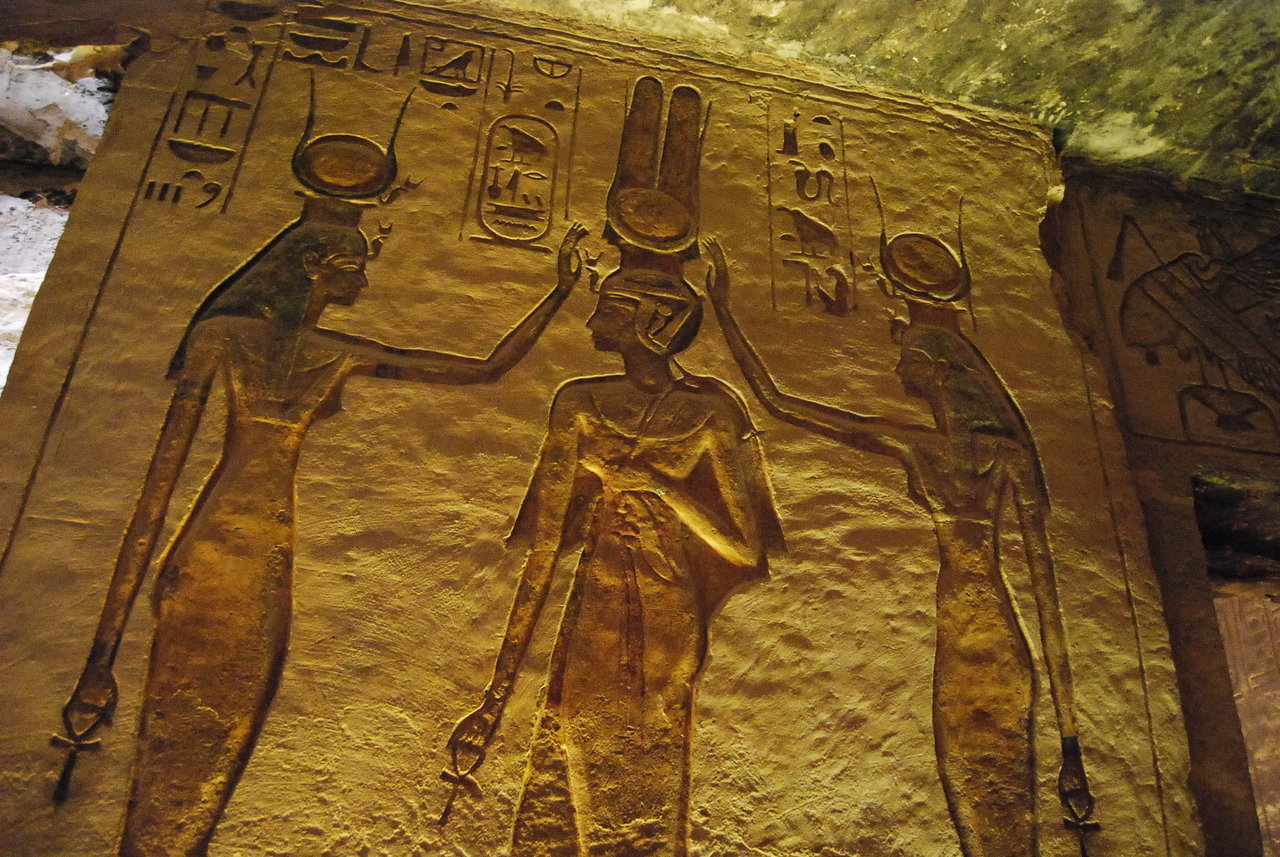 The terrace (1) leads to the sloping facade that provides the frame for six recesses, three on each side of the central doorway. Within each there are standing figures: four of the king and two of the queen. They appear to be walking forward with spirited strides. Ramses wears an elaborate crown of plumes and horns. On Nefertari’s head are plumes and the sun disc. At their sides are small figures of their children – the princesses beside Nefertari and the princes beside Ramses.

The legend of the love of Ramses for his wife is enumerated along with his titles: ‘Ramses, strong in Maat (Truth), beloved of Amon, made this divine abode for his royal wife, Nefertari, whom he loves’.

Throughout the temple, on pillar and wall, and even in the sanctuary, the names of the royal couple are linked in their shared dedication to the goddess Hathor.

The buttressed sloping projections between the figures on the facade bear hieroglyphic votive inscriptions. At the centre of the broadest, central section is the doorway leading to the Hypostyle Hall (2), a traverse chamber (3) and the sanctuary (4). The thickness of the doorway shows Ramses before Hathor, to the south, and Nefertari before Isis, to the north; Isis makes a gesture as though to crown her.

The Hypostyle Hall (2) has six pillars decorated on the front with sistra-the musical instrument associated with the goddess Hathor and with the heads of Hathor. Behind are representations of Ramses, Nefertari and various deities. The reliefs on the entrance walls (a) and (b) have fine representations of Ramses, accompanied by Nefertari, smiting a Libyan in the presence of Ra-Harakhte, and a Nubian in the presence of Amon-Ra respectively. The side walls have similar offering scenes. At (c) Ramses offers food to Ptah and also stands in front of the ram-headed Harshef. Nefertari makes offerings to Hathor. And Ramses offers wine to Ra-Harakhte. At (d) Ramses stands before Hathor. Ramses is blessed by Horus and Set of Nubt. Nefertari stands before Anukis. And Ramses presents an image of Maat to Amon. On the rear walls are Nefertari and Hathor (to the right) and Nefertari and Mut (to the left). Mut was the wife of Amon-Ra and, like Hathor, a mother figure. 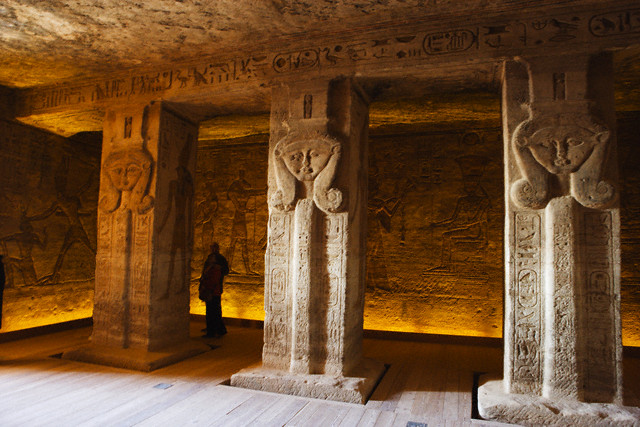 Interior of Temple of Nefertari

The traverse chamber (3) is adjoined by two unfinished chambers, to the right and left. Over the doorways, however, are reliefs of Hathor the sacred cow in a marsh, which are worth noting. In one case, Hathor is being worshipped by Ramses and in the other by Nefertari.

The sanctuary (4) has a recess to the rear, and the roof is supported by sistra. A representation of Hathor in the form of a cow protecting the king (who appears below her head) is a fine relief. On the right-hand wall Nefertari offers incense to Mut and Hathor. On the left the king pours a libation over his own image and also that of his wife. 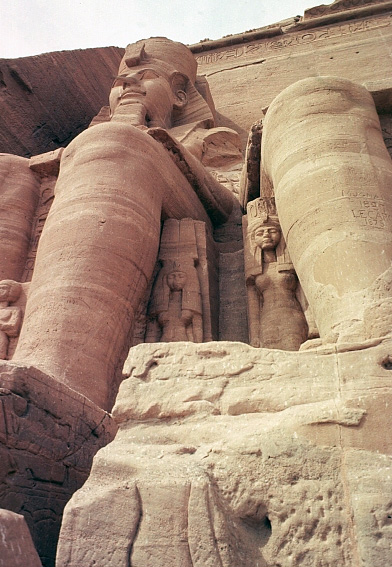 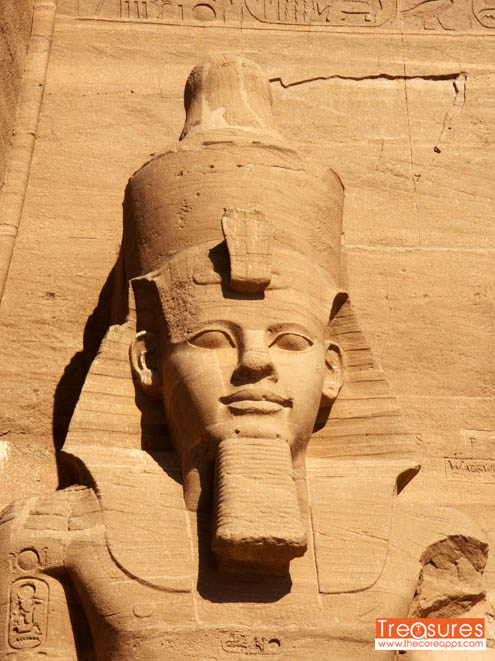