Ra – Egyptian Sun God. To the Egyptians, the sun represented light, warmth, and growth. This made the sun deity very important as the sun was seen as the ruler of all that he created. The sun disk was either seen as the body or eye of Ra.

Ra was thought to travel on two solar boats called the Mandjet (the Boat of Millions of Years), or morning boat and the Mesektet, or evening boat. These boats took him on his journey through the sky and the underworld. When Ra travelled in his sun boat he was accompanied by various other deities including Sia (perception) and Hu (command) as well as Heka (magic power). Sometimes members of the Ennead helped him on his journey, including Set who overcame the serpent Apophis and Mehen who defended against the monsters of the underworld.

Apophis, an enormous serpent tried to stop the sun boat’s journey every night by consuming it or by stopping it in its tracks with a hypnotic stare. In the evening the Egyptians believed that Ra set as Atum or in the form of a ram. The Mesektet or Night boat would carry him through the underworld and back towards the east in preparation for his rebirth. These myths of Ra represent the sunrise as the rebirth of the sun by the sky goddess Nut, thus attributing the concept of rebirth and renewal to Ra and strengthening his role as a creator god.

Ra (Re) was the primary name of the sun god of Ancient Egypt. He was often considered to be the King of the Gods and thus the patron of the pharaoh and one of the central gods of the Egyptian pantheon. He was also described as the creator of everything. Ra was so powerful and popular and his worship was so enduring that some modern commentators have argued that the Egyptian religion was, in fact, a form of veiled monotheism with Ra as the one god. This seems to be somewhat of an overstatement but underlines his primary position within religious texts throughout Egyptian history. 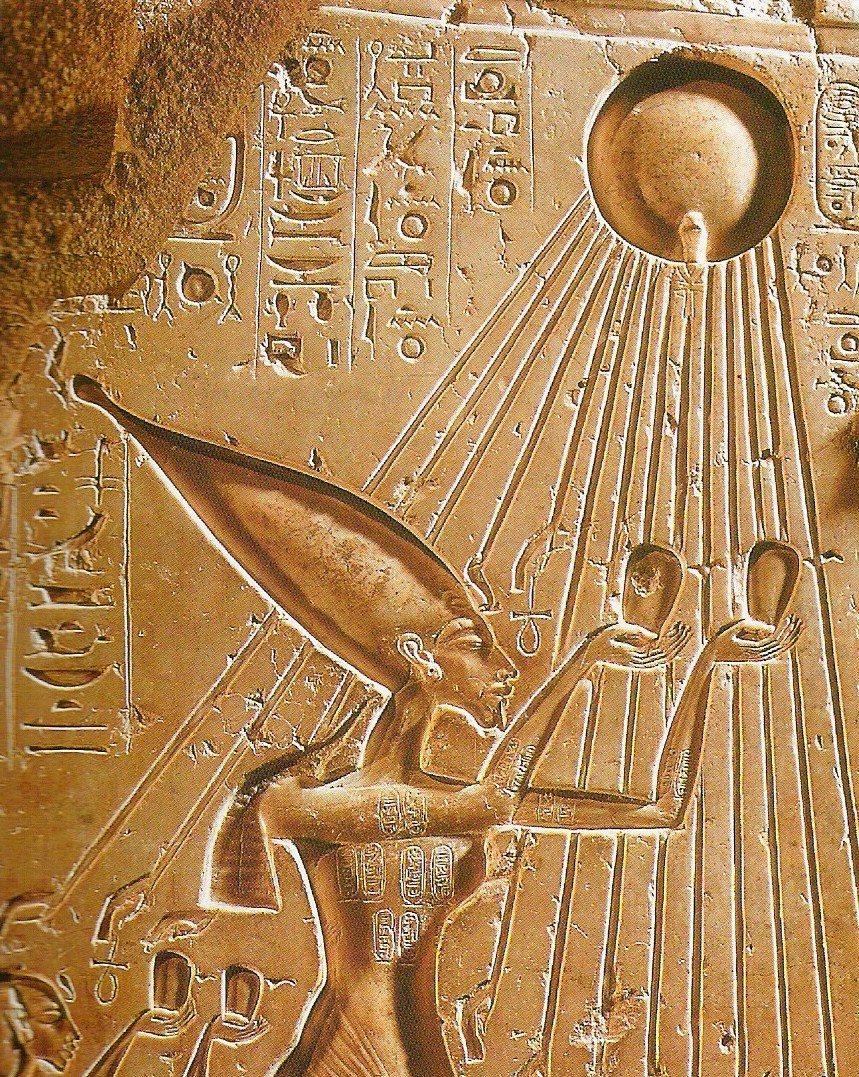 It is sometimes proposed that the pyramids represent the rays of light extending from the sun and thus these great monuments connected the king with Ra. The Egyptians also built solar temples in honour of Ra. Unlike the standard type of Egyptian temple, these temples were open to the sunlight and did not feature a statue of the god because he was represented by the sunlight itself. Instead, the temple centred on an obelisk and altar. The most significant early solar temple is thought to be the one erected in Heliopolis, sometimes known as “Benu-Phoenix”. Its location was thought to be the spot where Ra first emerged at the beginning of creation, and the city took its name (“Iwn”) from the word for a pillar.

Ra was an ancient god, but not the oldest of the gods; the first references to Ra date from the Second Dynasty. However, by the Fifth Dynasty, he was a powerful god who was closely associated with the pharaoh. The Pharaoh was already seen as the embodiment of Horus and so the two gods became linked, sometimes as the composite deity Ra-Horakhty (“Ra (is) Horus of the Horizon”). Ra also came to be associated with Atum (the creator god of the Ennead in Heliopolis) as Atum-Ra. By the Fifth Dynasty, the pharaoh was referred to as the son of Ra and the name of Ra was incorporated into the throne name of every king from that point onwards. Many Old Kingdom pharaohs built sun temples in which to worship Ra.

The Middle Kingdom saw the rise to prominence of Amun of Thebes. Although Ra kept his association with the pharaoh, he was to some degree absorbed by Amun as Amun-Ra. However, the priests of Amun became very wealthy and influential and so some of the pharaohs of the New Kingdom chose to elevate Ra in his stead, perhaps partly because he was already closely associated with the pharaoh. For example, Thuthmosis promoted Re-Horakhty as his favoured god while Amenhotep III took the epithet “the dazzling sun” and named his wife´s pleasure boat “the Aten Gleams”. His successor (and probable son) Akhenaten went one step further and rejected Amun and many of the other gods in favour of The Aten (a solar god).

The worship of the Egyptian God Ra was at its peak during the New Kingdom. Many of the tombs in the Valley of the Kings (dating from this period) included depictions of Ra’s journey through the underworld over twelve “hours” or stages. In the fifth hour, Ra dies and is reunited with Osiris in the underworld, but in the twelfth hour, he is reborn as the scarab (Khepri). Sun temples were again constructed during the New Kingdom (although those of the Armarna Period are dedicated to The Aten).

Amun-Ra was also popular in Nubia and was the chief deity of the Nubian Kingdom of Napata during the Twenty-fifth Dynasty. The Greeks associated Ra with Zeus and so he remained popular during the Ptolemaic Period. However, after this point, Egypt was governed by a series of foreign rulers who were not associated with the god of the pharaohs and so his popularity declined.

Associations with other gods

Ra was often described as the father of the gods. He was sometimes thought to be married to Hesat or Hathor although the latter is usually referred to as his daughter. As his worship was pre-dated by that of some of his “children” (such as Hathor and Horus) it seems likely that he took on this role when he was associated with the creator god Atum.

According to the Pyramid Texts, Ra (as Atum) emerged from the waters of Nun as a benben stone (an obelisk-like pillar). He then spat forth Shu (air) and Tefnut (moisture), and Tefnut in turn gave birth to Geb (earth) and Nut (sky). Ra tried to separate Geb and Nut by placing Shu between them and decreed that Nut could not give birth on any day of the calendar. However, Thoth won an extra five days from the moon so that Nut could give birth to Osiris, Set, Isis, Nephthys and Horus the Elder.

It was thought that Ra “died” or was swallowed by Nut every evening as the sun dipped below the horizon. He travelled through the world of the dead by night and was then reborn in the morning (making Nut both his granddaughter and his mother). At sunset, he was linked to Horakhty (Horus on the Horizon) and Atum and at dawn, he was linked to the scarab beetle, Khepri (“the Emerging One”) and Nefertum

Ra-Horakhty-Atum was associated with Osiris as the manifestation of the sun at night. When Osiris was murdered by his brother Set, he became the God of the Underworld. Thus the Pharaoh was the son of Ra who ruled as the living Horus and who became Osiris on his death.

According to another myth, Ra ruled on earth as Pharaoh until he became old and weary. The people had lost respect for him and no longer obeyed his laws and so Ra decided that they should be punished. He sent his “Eye” to teach them a lesson but then had to arrange to get her drunk to prevent her killing everyone. Once the danger had been averted, Ra decided it was time for him to leave the world to Horus ( who took his place as the king) and travel across the sky on Nut’s back.