Pyramid of Khufu – Giza, Lower Egypt. The Pyramid of Khufu (Cheops) has been known as an immense impressive structure since ancient times and is the only one of the original seven wonders of the world still in existence. Khufu, whose monument ‘Akhet Khufu’ (Horizon of Khufu), known today as The Great Pyramid, was the son of Snefru and he reigned for about 23 years. He was the first pharaoh to construct a pyramid on the Giza Plateau – his father had built three great burial monuments at Meidum and Dashur to the south – and at the height of Dynasty IV, Giza became the new extension to the Memphite necropolis.

The base of the pyramid measures 230.37m and its height was originally 146.6m, with an angle of slope of 51° 50′ 40”. The structure consists of an enormous quantity of limestone blocks (estimated at around 2,300,000), quarried from an area south-east of the pyramid and transported over a ramp to the construction site. The casing blocks were of fine white limestone, probably from the Tura quarries on the east bank of the river. There are, and probably always will be, many arguments and debates on the subject of the method of pyramid construction, and even whether they were built by human hands at all, but the precision of the design and perfection of its construction has always fascinated scholars and visitors.

The pyramid’s northern entrance was built at the level of the nineteenth layer of core blocks, but today visitors enter by a tunnel cut into the core, so Arabic legend tells us, by Caliph el-Ma’amun in the 9th century AD, which is below the original. The cave-like tunnel connects to a passage which the first time visitor almost expects to be lit with blazing torches – such is the atmosphere evoked – but is now lit by electric light. The passage splits into two parts, a lower corridor leading down into the pyramids bowels in the bedrock of the plateau and a subterranean chamber which was abandoned, perhaps due to lack of air, or for ritual reasons. This is usually kept locked.

The other passage ascends in a corridor so low that you almost have to crawl on your hands and knees towards a high processional way leading upwards into the Grand Gallery and the heart of the pyramid. My first experience of the Great Pyramid was at a time before the recently improved lighting and ventilation, when I could feel the pressure of millions of tons of stone bearing down on me from above, its high limestone walls leaning inwards to form a corbelled vault about 8.5m above the stair ramp. Higher and higher you go (the Great Pyramid is not for the faint-hearted or unfit visitor) until the entrance to the cathedral-like Grand Galley is reached. A horizontal passage at the bottom of this hall leads south into the so-called Queen’s Chamber.

The Queen’s Chamber is a small room with a gabled ceiling and lies exactly on the pyramid’s vertical east-west axis. This chamber seems not to have been intended for the burial of a queen and was left unfinished when the pyramid was sealed, suggesting that it was originally designed as the king’s burial chamber or a serdab (statue chamber) for the king’s ka, or spirit. The black-walled room at the heart of the pyramid produced an eerily solemn feeling when I entered the chamber alone and evokes a feeling of the insignificance of man and a strong sense of infinity.

Onwards and upwards into the Grand Gallery, another ascending passage, 47m long, which is so narrow that you wouldn’t wish to encounter a party of fifty Egyptian schoolboys (as I did) coming in the opposite direction. This is considered to be one of the greatest masterpieces of ancient Egypt and its corbelled roof is a stupendous achievement in architecture and engineering from any age. At the top of the gallery, another very low passage leads to the room known as the King’s Chamber, built entirely of red granite, where Khufu’s uncovered sarcophagus still stands against the western wall. The room is undecorated and contains no inscriptions, so how do we know who was the owner of the pyramid? The weight of the masonry above the ceiling of this chamber is relieved by five compartments covering the same area as the floor below. These are believed to have been constructed to relieve the stress of the enormous mass of stone above the burial chamber. The highest of these chambers has a cantilevered roof, and it was in this chamber that the early excavators Vyse and Perring found a graffiti left by the pyramid workmen, which included the cartouche of Khnum-Khuf (Khufu).

One interesting phenomenon I discovered in the king’s chamber, is the distortion of sound. If you hum a single note very quietly, it is amplified as it would be in the soundbox of a musical instrument and is thrown back at you from each of the walls. I would recommend that you are alone for this experiment!! 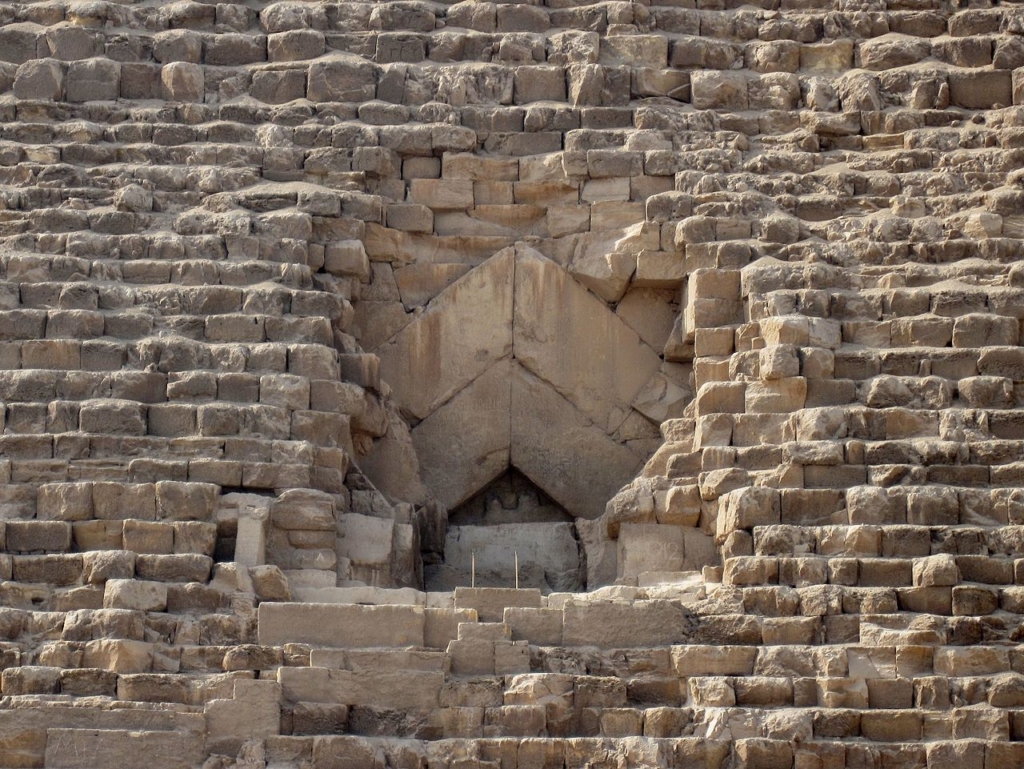 There has been an enormous amount of discussion and theorising about ‘air shafts’ in both the King’s Chamber and the Queen’s Chamber. The significance of these structures which lead steeply upwards, though not in a straight line, is still unknown and recent investigations with robot cameras have not really clarified their purpose.

The Great Pyramid continues to retain its many mysteries. On a first visit, it is better to just experience the awesomeness of this mighty structure rather than look for explanations of its secrets. It is almost a relief to get back into the sunlight and fresh air and the hassle of guides and hawkers for which the plateau is renowned. You may feel however, as I did, like an astronaut returning from a trip to another galaxy!
Pyramid Complex

Khufu’s pyramid complex has all of the elements of the traditional pyramid, though many are now long gone. Around the pyramid’s walls there are five large boat-shaped pits. In 1954 the pit on the south-eastern side was found to contain a completely dismantled wooden boat, the ‘Solar Boat’, thought to be used in the king’s funerary procession. This boat has now been reconstructed and is now on display in a purpose-built museum near where it was found. Although it has not yet been excavated, in 1987 the Egyptian Antiquities Organisation examined the second boat pit on the south-east, using a special probe. This was also found to contain a boat similar to the first.

The mortuary temple on the eastern side of the pyramid today consists only of the remains of a large rectangular courtyard covered with basalt paving, which must have been over 50m wide. It was destroyed in antiquity and its plan is now difficult to reconstruct, but of the few fragments of reliefs found there, motifs include the sed-festival and the festival of the white hippopotamus.

Khufu’s causeway has now virtually disappeared and has only been partly examined. Its original length has been estimated at around 810m, abruptly changing direction before it reached the valley temple. The ruins of the valley temple, which was mostly destroyed in antiquity, are now engulfed by the modern village of Nazlet es-Simman to the north-east. Recent excavations by the Egyptian Antiquities Organisation in 1990 have revealed the remains of a dark green basalt paving and the continuation of the causeway at the base of the escarpment. At the edge of the pavement a mudbrick wall thought to be 8m thick, suggests that a pyramid-town may have existed near the valley temple.

Better preserved are Khufu’s three small queens’ pyramids on the eastern side of the Great Pyramid and across the road running around the monument. The first pyramid to the north (G1-a), belongs to Khufu’s mother Hetepheres which was excavated by American Egyptologist George A Reisner in 1925. Hetepheres was the wife of Snefru and probably the mother of Khufu. Reisner’s team found Hetpheres’s beautiful funerary furniture and other burial equipment in a shaft tomb (G7000x) to the north of the queen’s pyramid. Her empty coffin, gold jewellery and sealed canopic chest was found with dismantled wooden furniture now reconstructed and on display in Cairo Museum. The queen’s remains were missing, however, and this has puzzled Egyptologists and has led to many theories about the location of her actual burial.

The second queen’s pyramid (G1-b) probably belongs to Meretites who lived during the reigns of Snefru, Khufu and Khafre according to an inscription in the nearby mastaba of Kawab, Khufu’s son. The third small pyramid (G1-c) may have belonged to Henutsen, daughter of Snefru and Khufu’s half-sister. Her name is known only from an inscription in the pyramid’s chapel which was converted to a Temple of Isis during Dynasties XXI to XXVI. The goddess Isis (or Isi) was worshipped as ‘Lady of the Pyramids’ at Giza until Roman times.

The pyramids of Khufu’s queens opened for the first time ever in 1998 after the restoration of the exterior masonry and the removal of black spots and salt stains from the chamber walls, by the Egyptian Antiquities Organisation. Wooden staircases, new lighting and ventilation were installed.

Recent excavations at the south-east corner of Khufu’s pyramid have revealed a destroyed satellite pyramid with T-shaped inner chambers and a descending corridor ending in a rectangular vaulted burial chamber. A large limestone block with three sloping sides was found on the satellite pyramid’s south side which proved to be the base of its pyramidion. Other stones of the pyramidion were found a year later on the northern side of the pyramid.

Not a single image of King Khufu has been found in the whole of his pyramid complex. The only known figure of the builder of one of the world’s greatest monuments is a small ivory statuette only 7.6cm high, which was found at Abydos. The figurine of the king on his throne bears the Horus name of Khufu, Hor-Mejedu.

Only 150 visitors per day are allowed to enter the Great Pyramid and tickets are sold in two lots at 8.00am and 1.00pm. Tickets for the Great Pyramid cost EGP 100. The three main pyramids are open on an annual rotation with one of them being closed for restoration each year.

Making a boat fit for a Pharaoh