Pyramid of Khafre – Giza, Lower Egypt. Khafre (Chephren) sited his pyramid at Giza, a short distance to the south-west of the monument of his father Khufu. Khafre’s brother Djedefre had succeeded their father on the throne but only reigned for around eight years and had chosen to site his own pyramid at Abu Roash to the north. Returning to Giza, Khafre’s monuments have survived better than most and his pyramid makes an impressive backdrop to the Great Sphinx which lies next to his causeway and was probably part of the pyramid complex.

Appearing to be bigger than Khufu’s pyramid because of the rising ground on which it was built and its steeper angle of slope, Khafre’s pyramid actually had a base measurement of 215m and a height of 143.5m, making it slightly smaller than his father’s. It is the only pyramid to be preserved almost to its full height by the casing stones remaining at its apex. Belzoni, in 1816, was the first to enter the pyramid in modern times. He discovered the upper entrance and underground chambers and is commemorated in an inscription by the English Colonel Fitzclarence on the upper entrance. In 1860 Auguste Mariette found seven statues of Khafre while excavating the valley temple, including a wonderfully preserved diorite statue of the king protected by a Horus falcon, one of the great masterpieces of Egyptian sculpture now in the Cairo Museum. More recent investigations of Khafre’s pyramid complex, using modern archaeological techniques, have been undertaken by the Giza Plateau Mapping Project under the directorships of Mark Lehner and Zahi Hawass.

The core of the pyramid, which was built on a levelled terrace, was of rough irregular limestone blocks, left behind when the casing blocks of Tura limestone were stripped off in antiquity, although a band of more regular-shaped stone can be seen just below the remaining casing. A lower course of the pyramid’s outer skin is composed of red granite which are well preserved on the southern side.

There are two entrances on the northern side of the pyramid. The first or ‘upper entrance’, found at a height of 11.5m, leads to a descending corridor which straightens out to join an ascending passage from the ‘lower entrance’. It is the lower entrance, at ground level which is used today to access the structure. This leads to a lower corridor which has an unfinished chamber cut into its western side and it is suggested that the lower gallery was begun on the assumption that the pyramid was to be built further north, or was intended to be larger, as the two entrances show. This may have been a serdab chamber however, similar the the ‘Queens Chamber’ in Khufu’s pyramid. The lower passage then ascends to meet the entrance corridor from above, and continues horizontally to the burial chamber.

Khafre’s burial chamber lies on the vertical axis of the pyramid and is simply constructed in a pit in the bedrock. The roof of the chamber is composed of pented limestone blocks, similar to those used in Khufu’s pyramid to relieve the weight of stone. The words ‘Discovered by G Belzoni – March 2 1816′ (in Italian) appear on the south wall of the burial chamber, although he had already discovered writing on the west wall showing that the pyramid had been entered previously, probably around the 12th century AD. The burial chamber was found to contain Khafre’s red granite sarcophagus, sunk slightly into the floor, it’s cover broken and a nearby pit which would have contained the canopic chest.

A satellite pyramid (G2-a) belonging to Khafre’s complex is now almost gone, with only the foundations remaining on the southern side of the king’s pyramid. It is currently believed to have been a cult pyramid and not to contain a burial.

The huge mortuary temple of Khafre’s complex is separated from the east face of the pyramid by a limestone pavement, which runs around all four sides of the pyramid. The temple was excavated in 1910 by Holscher and von Sieglin and shown to have consisted of an entrance hall, courtyard, five statue chapels, store-rooms and an offering hall. Sadly the structure was quarried for its stone in ancient times, but the surviving foundations show its innovative construction method, using massive core blocks of limestone cased with finer quality stone and lined on the inside with red granite. In the massive open courtyard there were recesses for huge statues of the king. Five boat pits were discovered to the north and south of the mortuary temple, but all of them had been plundered.

The ruined causeway leads from the mortuary temple, 494m south to Khafre’s valley temple, which is in a better state of preservation – the only well preserved valley temple found to date. This too was constructed from huge limestone monoliths, faced with granite and was discovered by Mariette in 1852 who wrongly described it as the Temple of the Sphinx. Huge rectangular blocks of Aswan granite form pillars and lintels, giving the structure a very distinctive style, reminiscent of the Osirion at Abydos. Originally there were 24 diorite statues of the king seated on his throne around the walls, of which only one survives to be seen in Cairo Egyptian Museum. Although it’s function is not yet clear, it is thought that the valley temple may have been used for the embalming rites before the king’s funeral and in 1995, traces of a ‘purification tent’ were found near the temple, along with two ramps and underground tunnels. 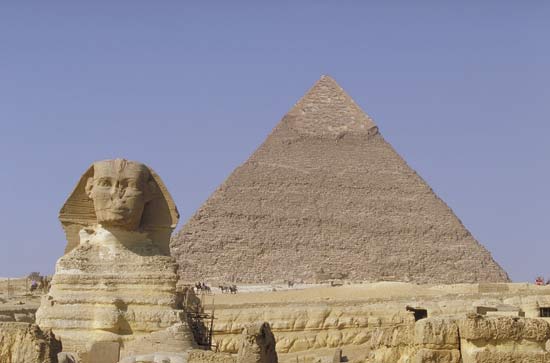 To the north of Khafre’s valley temple lies the Great Sphinx, inside its own enclosure. It is currently thought to have been modelled during Khafre’s reign, and would have been the first colossal statue in ancient Egypt.

The three main pyramids are open on an annual rotation with one of them usually being closed for restoration each year. Tickets for Khafre’s Pyramid cost EGP 30 and are on sale at 8.00am and 1.00pm. The numbers may be limited.