A beautiful love story bloomed around a tomb painting found in Saqqara, Egypt. The image shows an ancient Egyptian couple in a tender scene. While sweet, this type of image isn’t a common one – so researchers may be as interested in the painting and story as romantics are.

The intriguing painting graces the wall of a 4,400-year-old tomb belonging to a couple, their children, and possibly even their grandchildren. A priestess named Meretites and her husband, a singer named Kahai who performed at the pharaoh’s palace, are the primary owners of the tomb, and are the couple depicted in the painting.

Miral Lashien, a researcher at Macquarie University, suggested the beautiful nature of the tomb can be attributed to the social status the couple held in the Pyramid Age. 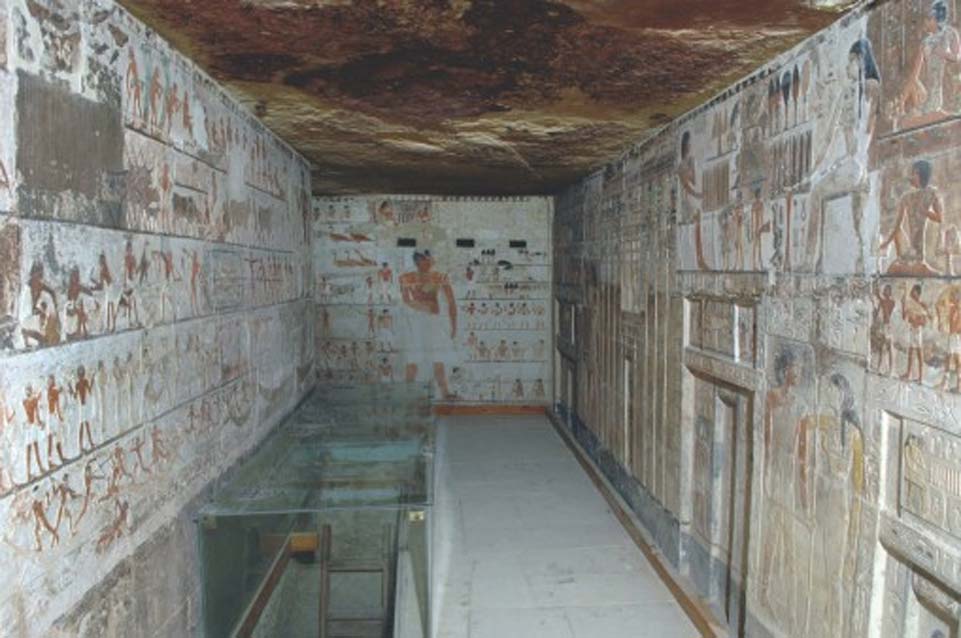 In fact, colorful scenes of people singing and playing musical instruments, such as harps and flutes, are splashed across the wall of the duos tomb. However, the scene that draws in the viewer the most is undoubtedly the portrayal of the priestess and singer lovingly gazing into each other’s eyes while Meretites places her right hand over Kahai’s right shoulder.

This type of image would be considered a tame or gentle depiction of a couple in the Western world today, but in ancient Egypt it was not normal – not even for a married couple. There are actually few examples of a face-to-face embrace from the Old Kingdom period (2649 – 2150 BC), the time period when Meretites and Kahai lived and pyramid building thrived. As Lashien reflected, “I think that this indicates very special closeness.”

Although a full-color image of the tomb painting didn’t appear in the media until 2013, the tomb itself was found in 1966 and the couple’s moment was portrayed in low quality black-and-white in a book in 1971. The more striking representation of the ancient Egyptian couple made global headlines thanks to the work of scientists at Macquarie University’s Australian Center for Egyptology.

Lashien explained that making higher quality color images of the tomb available was a necessary action, “This tomb is one of the most colorful examples of Old Kingdom art and certainly deserves a full-color publication.”

Apart from the eye-catching murals, the tomb also has five “false doors” with images of the deceased. The ancient Egyptians believed that these were a conduit between the world of the living and that of the dead. Furthermore, the living loved ones would place food in front of these ‘doors’ as offerings for the dead.