Osiris is the Egyptian Lord of the Underworld and Judge of the Dead, brother-husband to Isis, and one of the most important gods of ancient Egypt. The name `Osiris’ is the Latinized form of the Egyptian Usir which is interpreted as ‘powerful’ or ‘mighty’. He is the first-born of the gods Geb (earth) and Nut (sky) shortly after the creation of the world, was murdered by his younger brother Set, and brought back to life by his sister-wife Isis. This myth, and the gods involved became central to Egyptian culture and religious life. Osiris was originally a fertility god, possibly from Syria (though this claim is contested) who became so popular he absorbed the function of earlier gods such as Andjeti and Khentiamenti, two gods of fertility and agriculture worshipped at Abydos. He is associated with the djed symbol and is often depicted with black or green skin symbolizing the fertile mud of the Nile and regeneration. He is also frequently shown as a mummy or in a partially mummified form in his role as Judge of the Dead.

Images of Osiris as a living god depict him as a handsome man in royal dress wearing the crown of Upper Egypt as a plumed headdress known as the atef and carrying the crook and flail, symbols of kingship. He is associated with the mythical Bennu bird ( an inspiration for the Greek Phoenix) who rises to life from the ashes. Osiris was known by many names but chiefly as Wennefer, “The Beautiful One” and, in his role as Judge of the Dead, Khentiamenti, “The Foremost of the Westerners”. The west was associated with death and ‘westerners’ became synonymous with those who had passed on to the afterlife.

He was also known as The Lord of Love, King of the Living, and Eternal Lord. After Isis, Osiris was the most popular and enduring of all the Egyptian gods. His worship spanned thousands of years from shortly before the Early Dynastic Period (c. 3150-2613 BCE) to the Ptolemaic Dynasty (323-30 BCE), the last dynasty to rule Egypt before the coming of Rome. It is also possible that Osiris was worshipped in some form in the Predynastic Period of Egypt (c. 6000-3150 BCE) and probably that he originated at that time.

Although he is usually seen as a just, generous, and giving god of life and abundance there are also depictions of him as “a terrifying figure who dispatches demon-messengers to drag the living into the gloomy realm of the dead” (Pinch, 178) though these are the minority. Osiris as the kind and just ruler, murdered by his resentful brother, who comes back to life is the most popular and enduring image of the god. 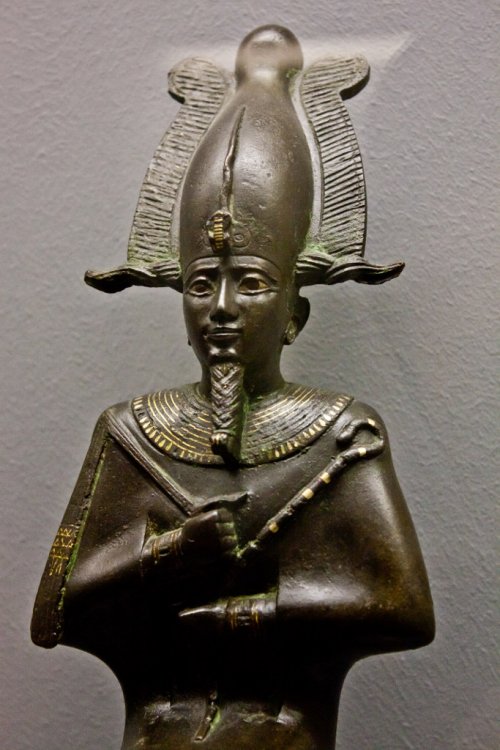 The myth embodied some of the most important values of Egyptian culture: harmony, order, eternal life, and gratitude. Set’s resentment of Osiris, even before the affair with Nepthys, grew from a lack of gratitude and an envy for someone else’s good fortune. In Egypt, ingratitude was a kind of “gateway sin” which opened the individual up to all others. The story dramatically illustrated how even a god could fall prey to ingratitude and the consequences which could follow. Just as importantly, the myth told the story of the victory of order over chaos and the establishment of harmony in the land; a central value of Egyptian culture and religion. 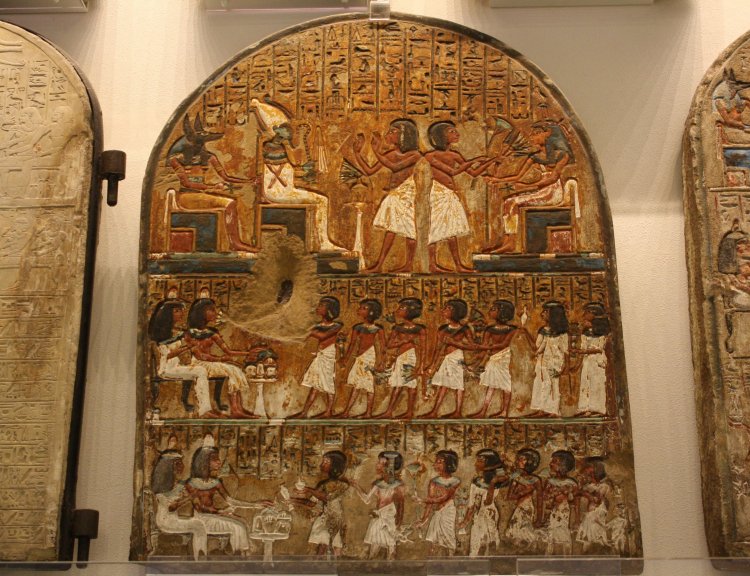 Osiris’ rebirth was associated with the Nile River, which was considered a symbol of his life-giving power. Osiris’ festivals were held to celebrate the beauty of the god and his transcendent power but also his death and rebirth. The festival of the Fall of the Nile commemorated his death while the Djed Pillar Festival celebrated Osiris’ resurrection.

The city of Abydos was his cult center and the necropolis there became the most sought-after burial ground as people wanted to be buried as close to the god as they could get. Those who lived too far away or did not have the resources for such a burial had a stele erected there with their name on it. Osiris was most widely worshipped as Judge of the Dead but the ‘dead’ continued to exist in another realm and death was not the end of one’s existence. The festivals, therefore, celebrated life – both on earth and afterwards – and part of these celebrations was the planting of an Osiris Garden which was a garden bed molded in the shape of the god and fertilized by the mud and water of the Nile. The grains which would later grow symbolized Osiris rising from the dead and also the promise of eternal life for the one who tended the garden. Osiris Gardens were placed in tombs where they are known as an Osiris’ Bed.

Priests of Osiris tended the temple and statue of the god at Abydos, Busiris, and Heliopolis and, as was customary with Egyptian worship, the priests alone were allowed into the inner sanctum. The people of Egypt were invited to visit the temple complex to make offerings and ask for prayers, seek medical advice and counsel, receive aid from the priests by way of material goods or financial gifts, and leave sacrifices to the god in asking for a favor or by way of thanking the god for a request granted.

Osiris, the King, & the People

Osiris was considered the first king of Egypt who established the cultural values all later kings were sworn to uphold. When Set murdered the king, the country plunged into chaos and order was only restored with the victory of Horus over Set. The kings of Egypt identified with Horus during life (they each had a personal name and a ‘Horus Name’ they took at the beginning of their reign) and with Osiris in death. As Isis was the mother of Horus, she was considered the mother of every king, the king was her son, and Osiris was both their father and their higher aspect and hope of salvation after death. 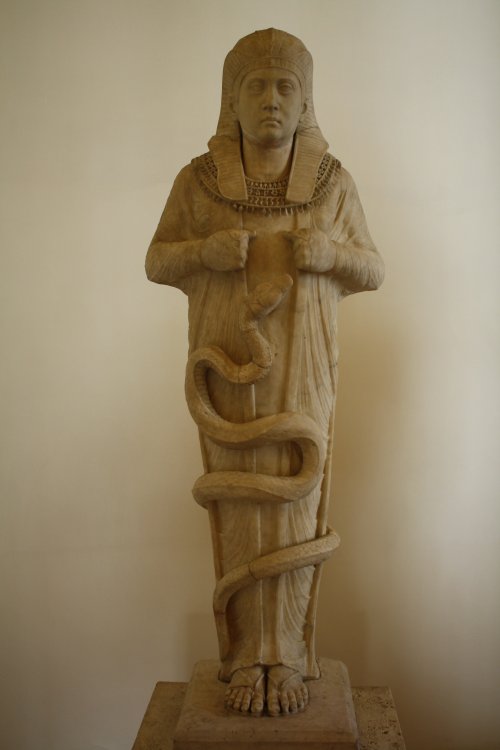 It is for this reason that Osiris is so often depicted as a mummified pharaoh; because pharaohs were mummified to resemble Osiris. The image of the great mummified god preceded the practice of preparing the royal body to look like Osiris. All the Egyptian symbols and images which made up the Pyramid Texts on the walls of tombs were meant to remind the soul of the deceased what to do next once they arrived in the afterlife. Their appearance as Osiris himself would not only remind them of the god but also would drive away dark spirits by fooling them into thinking one was the great god himself. The king’s appearance as modeled after Osiris’ extended throughout his reign; the famous flail and shepherd’s staff, synonymous with Egyptian pharaohs, were first Osiris’ symbols as the flail represented the fertility of his land while the crook symbolized the authority of his rule.

Harmony and order had been established by the son of Osiris, Horus, and the king was Horus’ living representative who provided for the needs of the people. Osiris was credited with establishing both the kingship and the natural order and law of life and so, through one’s participation in one’s community and observance of rituals, one was following Osiris’ guidelines. The people, as well as royalty, expected the protection of Osiris in life and his impartial judgment after death. Osiris was the all-merciful, the forgiving, and the just judge of the dead who oversaw one’s life on earth and in the afterlife.

The Mysteries of Osiris

Osiris’ identification with eternal life, with life from death, gave rise to his mystery cult which would travel beyond the boundaries of Egypt as the Cult of Isis. Although no one knows what rituals were involved in the mystery cult of Isis, they may have developed from Osiris’ earlier mysteries celebrated at Abydos beginning in the Twelfth Dynasty (1991-1802 BCE). These were very popular festivals which drew people from all over Egypt to participate in the ritual. Bunson notes that “the mysteries recounted the life, death, mummification, resurrection, and ascension of Osiris” (198). Dramas were staged with the major roles given to prominent members of the community and the local priests who enacted the story of the Osiris myth.

The story known as The Contention Between Horus and Set was then acted out in mock battles between The Followers of Horus and The Followers of Set where it seems anyone could participate. Once the battle had been won by the followers of Horus, the people celebrated the restoration of order and the golden statue of Osiris was brought forth from the inner sanctum of the temple and carried among the people who lavished gifts upon the image. The statue was carried through the city in a circuit and finally placed in an outdoor shrine where he could be admired by his people and also participate fully in the festivities. The emergence of the god from the darkness of his temple to participate in the joys of the living symbolized Osiris’ return to life from death.

Although this festival was primarily held at Abydos, it was also celebrated at other cult centers dedicated to Osiris throughout Egypt such as Bubastis (which was another very important cult center), Busiris, Memphis, and Thebes. Osiris, of course, was the central figure of these celebrations but, in time, the focus shifted to his wife, Isis, who had actually saved him from death and returned him to life. Osiris was intimately tied to the Nile River and the Nile River Valley of Egypt but Isis eventually became detached from any given locality and was considered the Queen of Heaven and the creator of the universe. All other Egyptian gods were finally seen as aspects of the mighty Isis and in this form, her cult traveled to Greece, to Phoenicia, to Rome and throughout the Roman Empire.

The Cult of Isis was so popular in the Roman world that it outlasted every other pagan belief system once Christianity took hold of the popular imagination. The most profound aspects of Christianity, in fact, can be traced back to the worship of Osiris and the Cult of Isis which grew from his story. In ancient Egypt, as in the modern day, people needed to believe that there was a purpose to their lives, that death was not the end, and that some kind of supernatural being cared for them and would protect them. The worship of the great god Osiris provided for that need just as people’s religious beliefs do today.

The Myth & Mysteries of Osiris