Merenptah 1213 – 1203 BC. In his last years, Rameses II had allowed the whole of the west side of the Delta to fall into the hands of foreigners, and on the east side the native Egyptians were being rapidly ousted by foreign settlers. His extravagant building projects had damaged the economy of the country and the people were impoverished. Now, through neglect, Egypt was in danger of losing the whole Delta, first to foreign immigrants and then by armed invasion.

This is the situation Rameses’ son, Merenptah, inherited. He spent the first few years of his reign making preparations for the struggle which he knew to be inevitable. For the first time in over 400 years, since the Hyksos shepherd kings had seized the delta at the end of the middle kingdom, Egypt was in danger of being overrun. 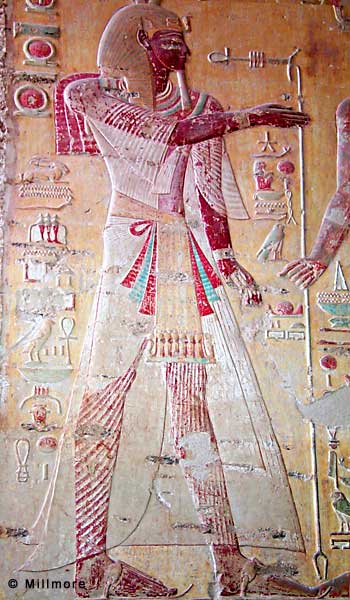 The Libyan chief, Meryawy, had decided to attack and conquer the Delta he was convinced of an easy victory believing the Egyptians to have grown soft. So confident was he that he brought his wife and children and all his possessions with him.

The night before the decisive battle Merenptah had a prophetic dream, “His Majesty saw in a dream as if a statue of the god Ptah stood before his Majesty. He said, while holding out a sword to him, ‘Take it and banish fear from thee.”

Merenptah had stationed archers in strategic positions, and they poured their arrows into the invading armies. “The bow -men of his Majesty spent six hours of destruction among them, then they were delivered to the sword.”

Then when the enemy showed signs of breaking, Merenptah let loose his charioteers among them. He had promised his people that he would bring the enemy “like netted fish on their bellies”, and he fulfilled his promise. His Triumph-Song shows that he regarded the defeat of the Libyans not so much as a great victory but rather as a deliverance.

“To Egypt has come great joy. The people speak of the victories which King Merenptah has won against the Tahenu: How beloved is he, our victorious Ruler! How magnified is he among the gods! How fortunate is he, the commanding Lord!

Sit down happily and talk, or walk far out on the roads, for now there is no fear in the hearts of the people.

The fortresses are abandoned, the wells are reopened; the messengers loiter under the battlements, cool from the sun; the soldiers lie asleep, even the border-scouts go in the fields as they list.

The herds of the field need no herdsmen when crossing the fullness of the stream. No more is there the raising of a shout in the night, ‘Stop! Someone is coming! Someone is coming speaking a foreign language!’ Everyone comes and goes with singing, and no longer is heard the sighing lament of men.

The towns are settled anew, and the husband man eats of the harvest that he himself sowed.

God has turned again towards Egypt, for King Merenptah was born, destined to be her protector.”

The defeat of the Libyans saved Egypt from utter ruin but her economic and political decline continued at a steady pace. The only other record of this time is of a grain shipment to the Hittites to relieve a famine so it seems the treaty between the two peoples continued to hold firm.

The rest of the dynasty is torn by political struggles for the throne. These pharaohs were all weaklings and their disputes only served to plunge the country into civil disorder.

“The land of Egypt was overthrown. Every man was his own guide, they had no superiors. The land was in chiefships and princedoms, each killed the other among noble and mean.”

Merneptah had to carry out several military campaigns during his reign. In year 5 he fought against the Libyans, who— with the assistance of the Sea Peoples— were threatening Egypt from the West. Merneptah led a victorious six-hour battle against a combined Libyan and Sea People force at the city of Perire, probably located on the western edge of the Delta. His account of this campaign against the Sea Peoples and Libu is described in prose on a wall beside the sixth pylon at Karnak, which states:

[Beginning of the victory that his majesty achieved in the land of Libya] -I, Ekwesh, Teresh, Lukka, Sherden, Shekelesh, Northerners coming from all lands.
Later in the inscription, Merneptah receives news of the attack:

… the third season, saying: ‘The wretched, fallen chief of Libya, Meryre, son of Ded, has fallen upon the country of Tehenu with his bowmen–Sherden, Shekelesh, Ekwesh, Lukka, Teresh, Taking the best of every warrior and every man of war of his country. He has brought his wife and his children–leaders of the camp, and he has reached the western boundary in the fields of Perire.’

In the Athribis Stele, in the garden of Cairo Museum, it states “His majesty was enraged at their report, like a lion”, assembled his court and gave a rousing speech. Later he dreamed he saw Ptah handing him a sword and saying “Take thou (it) and banish thou the fearful heart from thee.” When the bowmen went forth, says the inscription, “Amun was with them as a shield.” After six hours the surviving Nine Bows threw down their weapons, abandoned their baggage and dependents, and ran for their lives. Merneptah states that he defeated the invasion, killing 6,000 soldiers and taking 9,000 prisoners. To be sure of the numbers, among other things, he took the penises of all uncircumcised enemy dead and the hands of all the circumcised, from which history learns that the Ekwesh were circumcised, a fact causing some to doubt they were Greek.

There is also an account of the same events in the form of a poem from the Merneptah Stele, widely known as the Israel Stele, which makes reference to the supposed utter destruction of Israel in a campaign prior to his 5th year in Canaan: “Israel has been wiped out…its seed is no more.” This is the first recognised ancient Egyptian record of the existence of Israel–“not as a country or city, but as a tribe” or people. 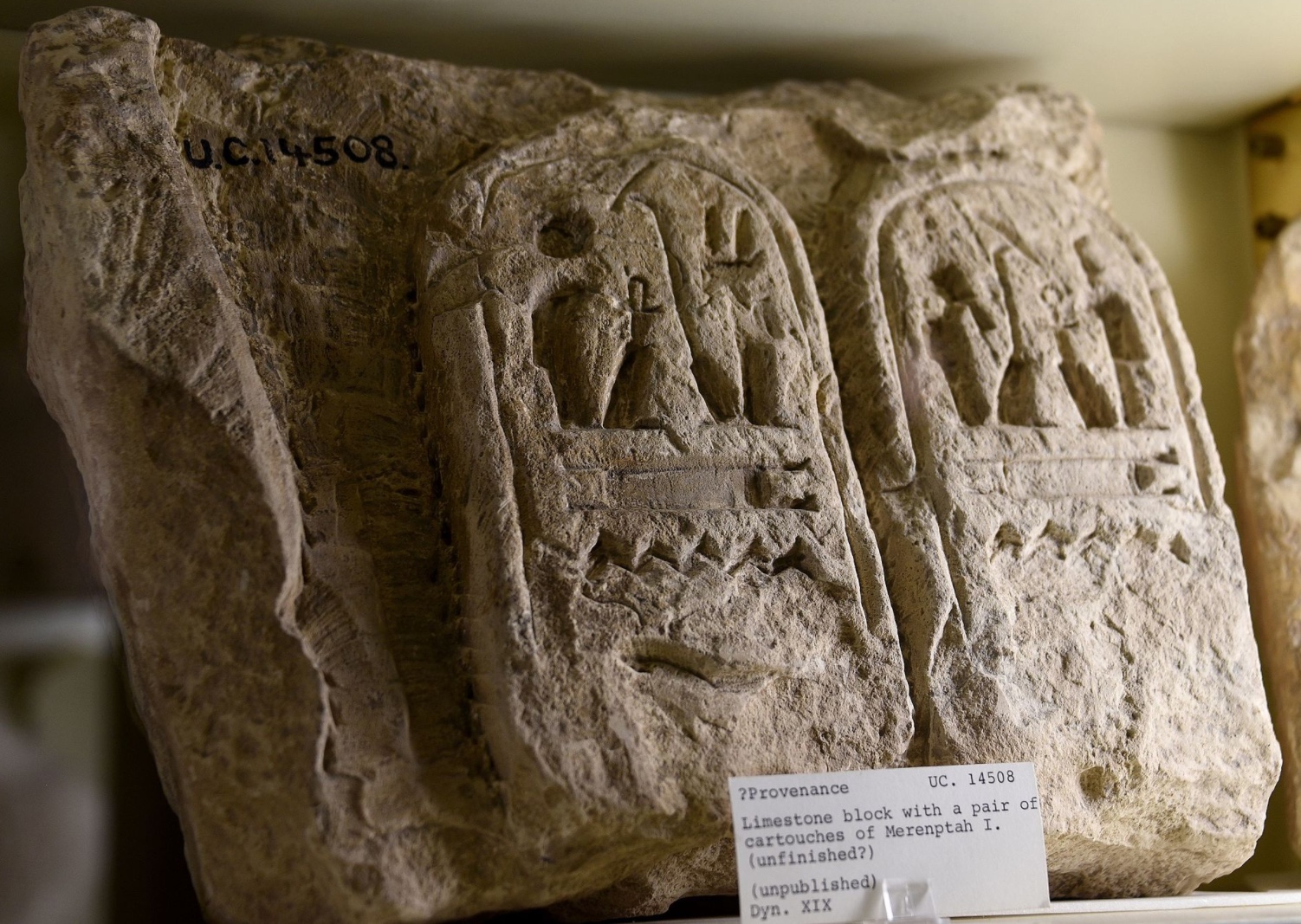 Limestone block showing a pair of unfinished cartouches of Merenptah (Merneptah) I. 19th Dynasty. From Egypt. The Petrie Museum of Egyptian Archaeology, London

Merneptah was already an elderly man in his late 60s, if not early 70s, when he assumed the throne. Merneptah moved the administrative center of Egypt from Piramesse (Pi-Ramesses), his father’s capital, back to Memphis, where he constructed a royal palace next to the temple of Ptah. This palace was excavated in 1915 by the University of Pennsylvania Museum, led by Clarence Stanley Fisher.

Merneptah’s successor, Seti II, was a son of Queen Isetnofret. However, Seti II’s accession to the throne was not unchallenged: a rival king named Amenmesse, who was either another son of Merneptah by Takhat or, much less likely, of Ramesses II, seized control of Upper Egypt and Kush during the middle of Seti II’s reign. Seti was able to reassert his authority over Thebes in his fifth year, only after he overcame Amenmesse. It is possible that before seizing Upper Egypt, Amenmesse had been known as Messuwy and had been viceroy of Kush. 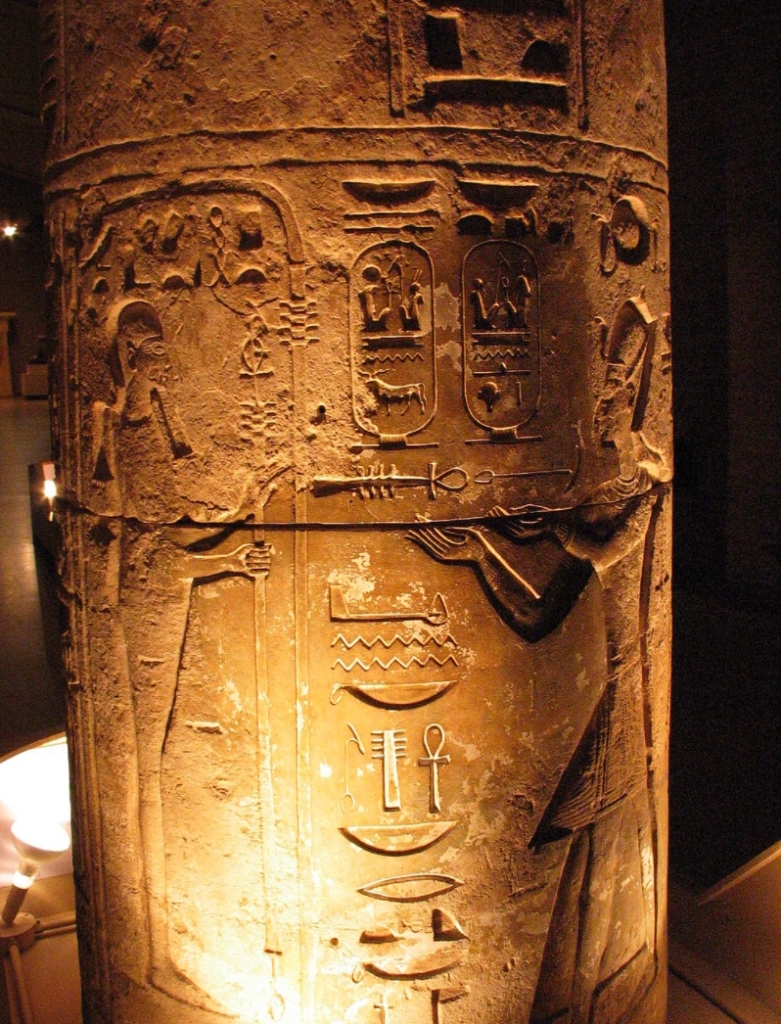 Merneptah makes an offering to Ptah on a column 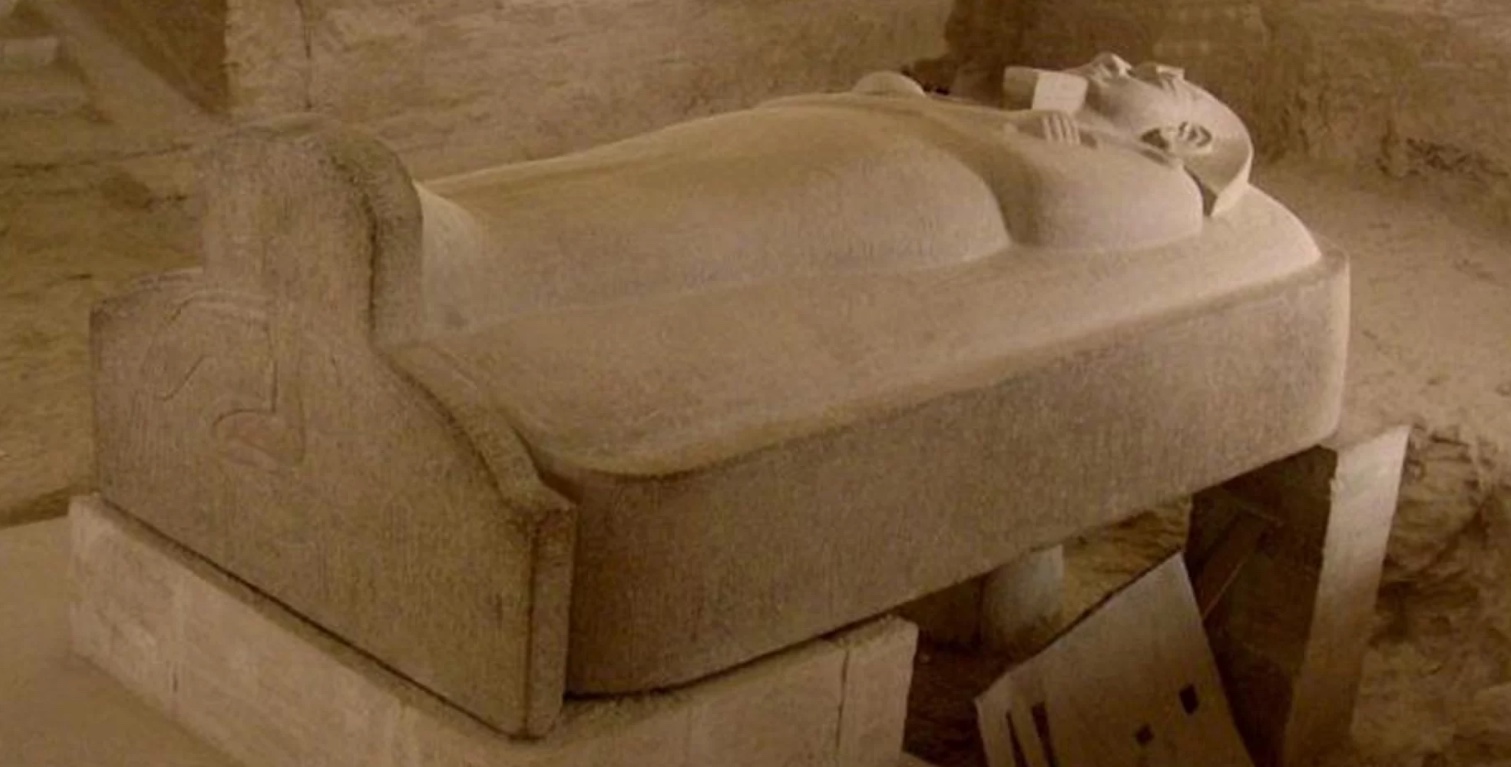 Stone sarcophagus of Merneptah in KV8.

Merneptah suffered from arthritis and atherosclerosis and died an old man after a reign which lasted for nearly a decade. Merneptah was originally buried within tomb KV8 in the Valley of the Kings, but his mummy was not found there. In 1898 it was located along with eighteen other mummies in the mummy cache found in the tomb of Amenhotep II (KV35) by Victor Loret. Merneptah’s mummy was taken to Cairo and eventually unwrapped by Dr. G. Elliott Smith on July 8, 1907. Dr. Smith notes that:

The body is that of an old man and is 1 meter 714 millimeters in height. Merneptah was almost completely bald, only a narrow fringe of white hair (now cut so close as to be seen only with difficulty) remaining on the temples and occiput. A few short (about 2 mill) black hairs were found on the upper lip and scattered, closely clipped hairs on the cheeks and chin. The general aspect of the face recalls that of Ramesses II, but the form of the cranium and the measurements of the face much more nearly agree with those of his [grand]father, Seti the Great.