Luxor Temple – Luxor East Bank, Upper Egypt. Within the center of Luxor is the temple once known as ‘Ipet-resyt’ or ‘the southern Opet’ which served as a focal point for the Opet festival. Once a year the divine image of Amun with his consort Mut and their son Khonsu would journey in their sacred barques from Karnak Temples to the temple at Luxor to celebrate the festival which was held during the inundation. Opet’s primary function was religious but the festival was also significant in maintaining the king’s divine role.

The earliest remains found at Luxor Temple date to Dynasty XIII and it is possible that there was a shrine or temple on this site during the Middle Kingdom, but it became more prominent in Dynasty XVIII. It would seem that Hatshepsut first began the overland processional way which linked Karnak and Luxor temples, with barque stations along the route. It was Amenhotep III who constructed the colonnade and court in the heart of the temple which was added to by other pharaohs. Reused blocks of Hatshepsut, Tuthmose III and Amenhotep II from earlier destroyed structures have been found.

Unusually, the temple does not face the river, but its main axis faces Karnak with the remains of an avenue of sphinxes pointing to the professional way. This remaining 200m avenue of human-headed sphinxes was erected by Necatnebo I to replace the original ram-headed sphinxes of Amenhotep III when Nectanebo built an enclosure wall around the precinct. A Roman shrine with a headless statue of Isis can be seen in the north-western corner of the forecourt. 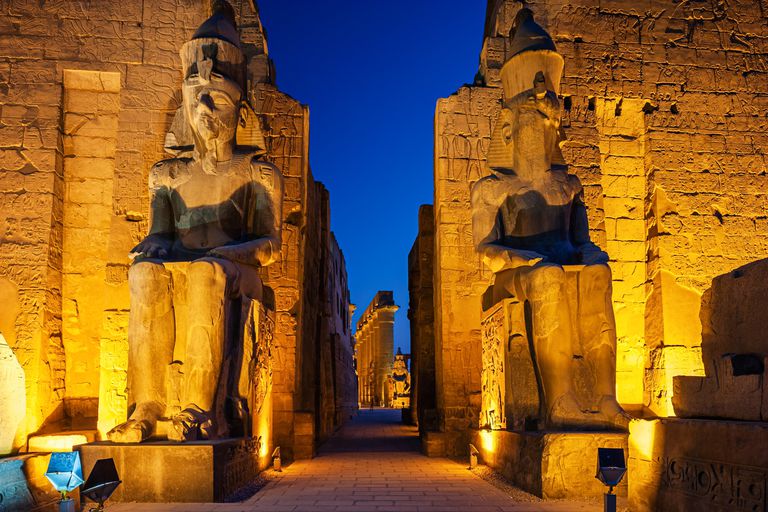 The modern entrance to the temple is to the west and after descending the new stone steps the visitor faces the massive first pylon, 21m high, which was a later addition by Rameses II. Six statues of Rameses stood before the pylon, but only three remain today with one of an original pair of tall obelisks. The northwest obelisk now stands in the Place de la Concorde in Paris. The pylon is decorated on its outer face with scenes of the battles of Rameses II and the famous ‘battle poem’. This is best seen in the early morning sun. The inner face has a dedication text and records of the battle of Kadesh as well as festival scenes. On the south face of the east tower in the first courtyard is a relief showing the exterior of the temple when it was first built, with flags flying on the flagpoles.

Beyond the first pylon is the court of Rameses II which would have been the original forecourt of Amenhotep III’s building. On the north-western side is a triple barque shrine of Amun, Mut and Khonsu constructed in sandstone with features belonging to the earlier structure of Hatshepsut retained in the rebuilding. Rameses’ great court features a colonnade around each of its sides interspaced with colossal statues, many of which the king usurped from Amenhotep III.

When entering the colonnade of Amenhotep III you may notice a slight change in the axis of the earlier part of the temple. This colonnade with its 14 tall papyrus columns was unfinished at Amenhotep’s death and its decoration only completed during the reign of Tutankhamun (and finally completed in the reign of Seti I). Here you can see superbly executed reliefs of the Opet procession to and from karnak on its west and east walls, but Tutankamun’s name has been altered throughout the texts to that of Horemheb. These are best viewed at night when the temple is floodlit, the lighting at the base of the walls throws the decoration into sharp relief.

The colonnade leads into the elegant columned court of Amenhotep III with barque shrines of Mut and Khonsu at its southern end. In 1989 during restoration work, a spectacular cache of statues was found beneath the floor of the eastern side of the court and these can now be seen in the Luxor Museum. Beyond the portico on the south side of the court is a room which was transformed into a cult chapel of the Roman legion based at Luxor during the third century AD. The room was plastered over and this has served to preserve the painted reliefs of Amenhotep III. A niche-shaped shrine is now a modern entrance to a small offering hall or vestibule, with pharaonic scenes of sacrifices and offerings to the gods. Within the sanctuary or barque shrine beyond, a free-standing shrine was built by Alexander the Great in which the Greek king appears as Pharaoh.

A doorway to the east leads to the ‘birth-room’ with its scenes illustrating the myth of the divine birth of Amenhotep III on the west wall. After scenes of the union of Amun with the king’s mother Mutemwiya, the creator god Khnum can be seen fashioning the baby king Amenhotep III with his ka behind him. Mutemwiya is shown giving birth and the newborn king is presented to the gods. These interesting scenes which claim the legitimacy of the king and his divine right to rule are also best seen when lit up at night.

Behind the sanctuary is a private antechamber known as the ‘Opet (harem) suite’, a broad hall with 12 columns which opens into a number of smaller chambers behind. These chambers are said to have a special significance relating to the creation and solar mythologies of Amun and Re at Luxor. The central chamber at the back of the temple was the original holy of holies which still has the remains of the pedestal on which the image of the god rested. It would seem that it was in these rooms that the real mysteries of the temple were enacted.

The exterior walls are also worth a look. The western side depicts the battles of Rameses II including the Syrian and Libyan wars, with details of named fortresses. 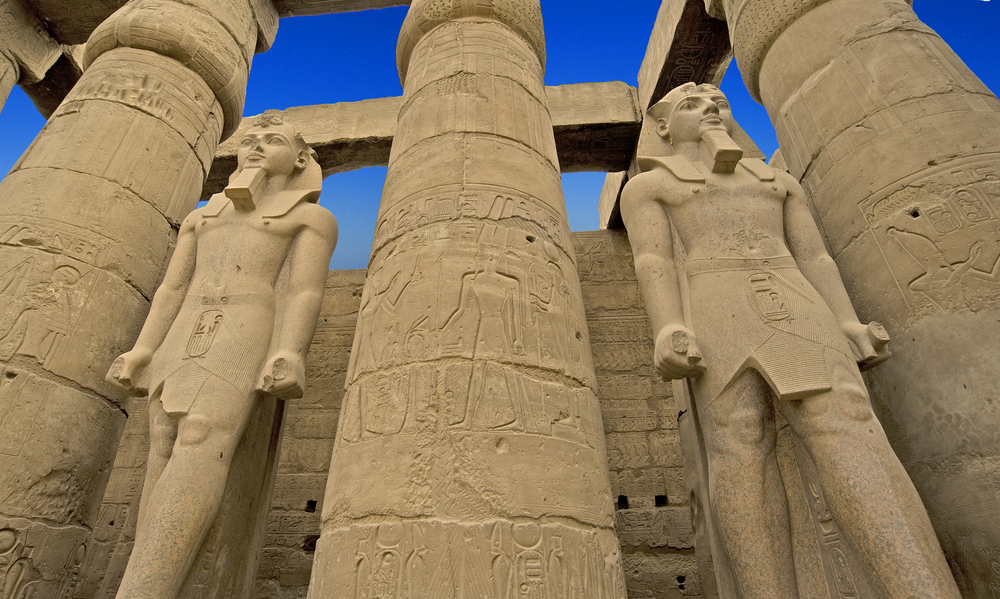 During the Roman occupation of Egypt, Luxor Temple was surrounded by a vast military encampment which may have housed as many as 1500 men. By this time the temple would have ceased to have a religious function and it is likely that many blocks from the outer temple buildings were used to supplement the mudbricks of the Roman barracks. Remains of stone pillars and avenues can still be seen all around the temple enclosure.

A Christian basilica was built in the north-eastern corner of the temple and later a mosque dedicated to the Muslim saint Abu’l Hagag was built over the site. This is now a monument in its own right and is a dominant feature of the eastern side of the Rameses court.

How to get there

Luxor Temple is on the Corniche in the central part of the town, opposite the ferry dock. Winter opening hours are 6.00am to 9.00pm and tickets cost EGP 50. In the evening the temple is floodlit and many of the reliefs which are indistinct during the day can be clearly seen.