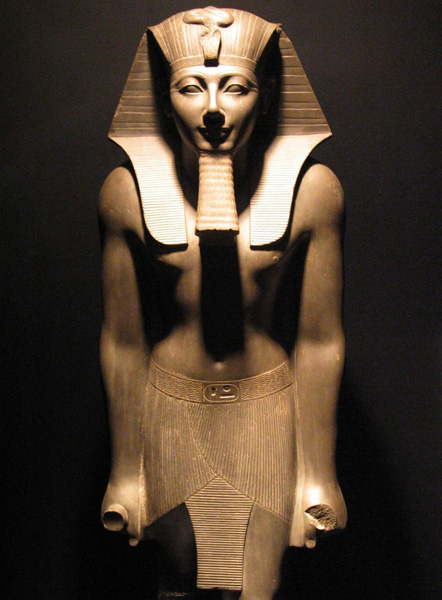 Thutmose III 1479 – 1425 BC. Thutmose III possessed all the qualities of a great ruler. A brilliant general who never lost a battle, he also excelled as an administrator and statesman. He was an accomplished horseman, archer, athlete and discriminating patron of the arts. His reign, with the exception of the uncharacteristic spite against the memory of Hatshepsut, was notable for its lack of bad taste and brutality. Thutmose had no time for pompous, self-indulgent bombast and his records show him to be a sincere and fair-minded man.

During Hatshepsut’s reign, there were no wars. Egypt’s neighbouring countries regularly paid tribute but as is often the case when a new king comes to the throne subject nations are inclined to test his resolve.

Thutmose found himself faced with a coalition of the princes of Kadesh and Megiddo, who had mobilised a large army. Also the Mesopotamians and their kinsmen living in Syria refused to pay tribute and declared themselves free of Egypt. Not daunted, Thutmose immediately set out with his army and crossing the Sinai desert he marched to the city of Gaza, which had remained loyal to Egypt. The events of the campaign are well documented because of Thutmose’s private secretary, Tjaneni, kept a record which was later copied and engraved onto the walls of the temple of Karnak.

This first campaign revealed Thutmose to be the military genius of his time. He understood the value of logistics and lines of supply, the necessity of rapid movement and sudden surprise attack. He lead by example and was also probably the first person in history to really utilise sea-power to support his campaigns.

Megiddo was his first objective because it was a key point and had to be taken at all costs. When he reached Aaruna Thutmose held a council with all his generals. There were two routes to Megiddo a long, easy and level road around the hills, which the enemy expected Thutmose to take, and a route which was narrow, difficult and cut through the hills. His generals advised him to take the easy road through the hills, saying “horse must follow behind horse and man behind man also, and our vanguard will be engaged while our rearguard is at Aaruna without fighting” But Thutmose’s reply to this was “As I live, as I am the beloved of Ra and praised by my father Amon, I will go on the narrow road. Let those who will go on the roads you have mentioned; and let anyone who will, follow my Majesty” Now, when the soldiers heard this bold speech they shouted with one accord We follow thy Majesty whithersoever thy Majesty goes”. 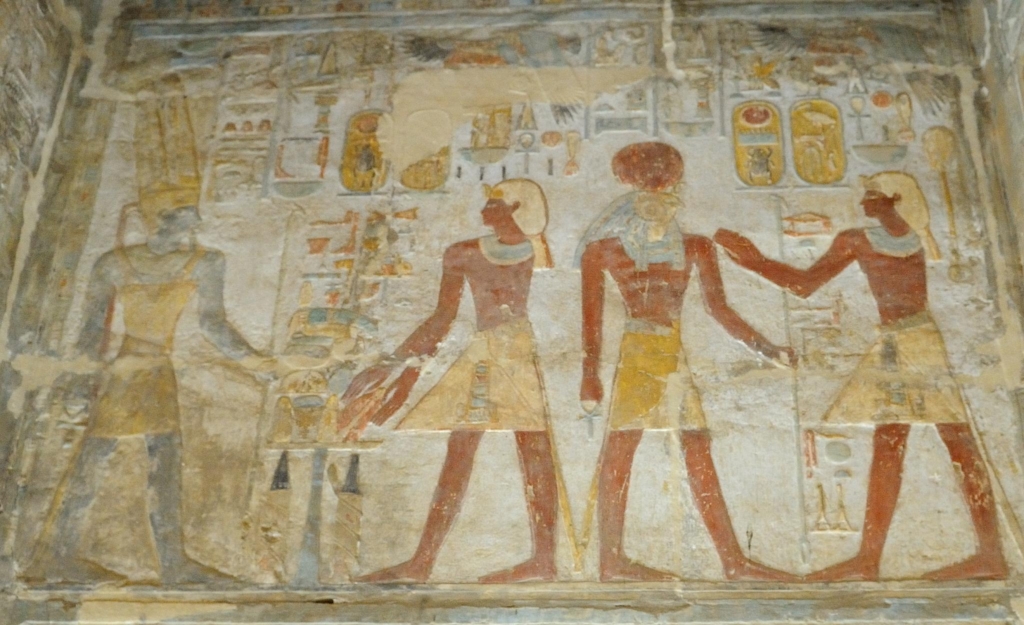 Thutmose led his men on foot through the hills “horse behind horse and man behind man, his Majesty showing the way by his own footsteps”. It took about twelve hours for the vanguard to reach the valley on the other side and another seven hours before the last troops emerged. Thutmose himself waited at the head of the pass till the last man was safely through.

The sudden and unexpected appearance of Egyptians in their rear forced the allies to make a hasty re-deployment of their troops. There are said to have been over 300 allied kings, each with his own army, an immense force. However, Thutmose was determined and when the allies saw him at the head of his men leading them forward, they lost heart for the fight and fled for the city of Megiddo “As if terrified by spirits: they left their horse and chariots of silver and gold”

The Egyptian army, being young and inexperienced fell upon the plunder of the battlefield and lost the opportunity of taking the city immediately. Thutmose was very angry, he said to them “If only the troops of his Majesty had not given their hearts to spoiling the things of the enemy, they would have taken Megiddo at that moment. For the ruler of every northern country is in Megiddo and it’s capture is as the capture of a thousand cities.”

Megiddo was besieged. A moat was dug around the city walls and this was completed by a strong wooden palisade. The king gave orders to let nobody through except those who signalled at the gate that they wished to give themselves up.

The siege lasted some seven months but eventually the vanquished kings sent out their sons and daughters to sue for peace. “All those things with which they had come to fight against my Majesty, now they brought them as tribute to my Majesty, while they themselves stood upon their walls giving praise to my Majesty, and begging that the Breath of Life be given to their nostrils”

They received good terms for surrender. An oath of allegiance was imposed upon them “We will not again do evil against Menkheper Ra our good Lord, in our lifetime, for we have seen his might, and he has designed to give us breath.”

Thutmose III is compared with Napoleon but unlike Napoleon he never lost a battle. He conducted sixteen campaigns in Palestine, Syria and Nubia and his treatment of the conquered was always humane. He established a sort of Pax Egyptiaca over his empire. Syria and Palestine were obliged to keep the peace and the region as a whole experience an unprecedented degree of prosperity.

Thutmose III’s impact upon Egyptian culture was profound. He was a national hero who was revered long after his time. Indeed his name was held in awe even to the last days of Egyptian history. Besides his military achievements he carried out many building works at Karnak. He also set up a number of obelisks in Egypt. One of which, mistakenly called Cleopatra’s Needle, now stands on the Embankment in London. It’s brother is in Central Park in New York. Another is near the Lateran in Rome and there is also one of his obelisks in Istanbul. Therefore, he has had an unwitting presence in some of the most powerful nations of the last two thousand years.