Horus is one of the oldest and most significant deities in ancient Egyptian religion, who was worshipped from at least the late Predynastic period through to Greco-Roman times. Different forms of Horus are recorded in history and these are treated as distinct gods by Egyptologists. These various forms may possibly be different perceptions of the same multi-layered deity in which certain attributes or syncretic relationships are emphasized, not necessarily in opposition but complementary to one another, consistent with how the Ancient Egyptians viewed the multiple facets of reality. He was most often depicted as a falcon, most likely a lanner or peregrine, or as a man with a falcon head.

The name Horus is Greek. In Ancient Egypt he was known as “Heru” (sometimes Hor or Har), which is translated as “the distant one” or “the one on high”(from the preposition “hr” meaning “upon” or “above”). He was considered to be a celestial falcon, and so his name could be a specific reference to the flight of the falcon, but could also be seen as a more general solar reference. It is thought that the worship of Horus was brought into Egypt during the predynastic period.

He seems to have begun as a god of war and a sky god who was married to Hathor, but soon became considered as the opponent of Set, the son of Ra, and later the son of Osiris. However, the situation is confused by the fact that there were many Hawk gods in ancient Egypt and a number of them shared the name Horus (or more specifically Har, Heru or Hor). Furthermore, the gods Ra, Montu and Sokar could all take the form of a falcon. Each “Horus” had his own cult center and mythology, but over time they merged and were absorbed by the most popular Horus, Horus Behedet (Horus of Edfu).

He was the protector and patron of the pharaoh. As Horus was associated with Upper Egypt (as Heru-ur in Nekhen) and Lower Egypt (as Horus Behedet or Horus of Edfu) he was the perfect choice for a unified country and it seems that he was considered to be the royal god even before unification took place. The Pharaoh was often considered to be the embodiment of Horus while alive (and Osiris once he was deceased). The Turin Canon describes the Predynastic rulers of Egypt as “the Followers of Horus”, and the majority of Pharaohs had an image of Horus at the top of their serekh (a stylised palace facade in which one of the king´s name was written).

However, Sekhemhib (Seth Peribsen) chose to place Horus´ opposite and enemy Set on his serekh while Khasekhemwy placed both Set and Horus above his serekh. As a result, some scholars argue that the mythical battle between Horus and Set was once a real battle between the followers of Set and the followers of Horus. If this was the case, it would seem that the followers of Horus won as Horus remained a popular emblem of kingship while Set was gradually transformed into a symbol of evil. The Pharaoh also had a name (known as the “Golden Horus” name) which was preceded by an image of a sacred hawk on the symbol for gold which specifically linked the Pharaoh to the god. However, it is interesting to note that Set was also known as he of Nubt (gold town), so the symbol for gold could, in fact, relate to him. 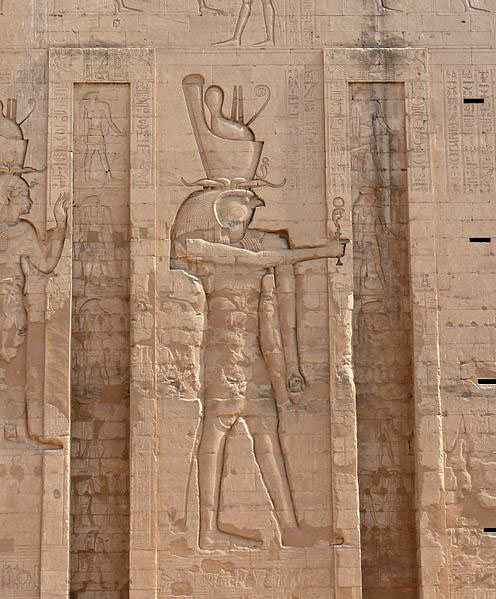 Horus and Set were always placed in opposition to each other. However, the exact nature of their relationship changed somewhat over time. Set was the embodiment of disorder and chaos while Horus was the embodiment of order. Similarly, Horus represented the daytime sky while Set represented the nighttime sky. However, in early times the two were also seen as existing in a state of balance in which Horus and Set represented Upper and Lower Egypt respectively. They were often depicted together to indicate the union of Upper and Lower Egypt and there is even a composite deity named Horus-Set, who was depicted as a man with two heads (one of the hawk of Horus, the other of the Set animal).

At this stage, Horus was often considered to be Set´s brother and equal and the fight between them was thought to be eternal. However, the rise in importance of the Ennead resulted in Horus being cast as the son of Osiris and thus the nephew of Set. This changed the nature of the conflict between them, as it was now possible for Set to be defeated and for Horus to claim the throne of Egypt as his own.

The “Eye of Horus” was a powerful protective amulet and when it was broken into pieces (in reference to the time Set ripped out Horus’ eye), the pieces were used to represent the six senses (including thought) and a series of fractions.

Horus was also the patron of young men and was often described as the perfect example of the dutiful son who grows up to become a just man. However, this is perhaps debatable in the light of one of the stories concerning his fight with Set. The mother of Horus (Isis) was a great magician who most certainly had the power to destroy Set. However, when her chance came she could not take it. Set was, after all, her brother. This angered Horus so much that he chopped off his mother’s head in a fit of rage! Thankfully, Isis was more than able to handle this insult and immediately caused a cow’s head to grow from her neck to replace her head. Luckily for Horus, Isis was a compassionate and sympathetic goddess and she forgave her vengeful son his aggressive act.

The Egyptian God Horus was usually depicted as a falcon or a falcon-headed man. He often wore the Double Crown of Upper and Lower Egypt. In anthropomorphic form Horus appears as both an adult man and a child, wearing the sidelock of youth (as the son of Isis). There are also numerous depictions of a Horus the child hunting crocodiles and serpents and amulets are known as “cippi” were inscribed with his image to ward off dangerous animals.

Since Horus was said to be the sky, he was considered to also contain the sun and moon. It became said that the sun was his right eye and the moon his left, and that they traversed the sky when he, a falcon, flew across it. Later, the reason that the moon was not as bright as the sun was explained by a tale, known as the contestants of Horus and Set, originating as a metaphor for the conquest of Upper Egypt by Lower Egypt in about 3000 BC. In this tale, it was said that Set, the patron of Upper Egypt, and Horus, the patron of Lower Egypt, had battled for Egypt brutally, with neither side victorious, until eventually, the gods sided with Horus.

As Horus was the ultimate victor he became known as Harsiesis, Heru-ur or Har-Wer (ḥr.w wr ‘Horus the Great’), but more usually translated as Horus the Elder. In the struggle Set had lost a testicle, explaining why the desert, which Set represented, is infertile. Horus” left eye had also been gouged out, which explained why the moon, which it represented, was so weak compared to the sun.
Horus was occasionally shown in art as a naked boy with a finger in his mouth sitting on a lotus with his mother. In the form of a youth, Horus was referred to as Neferhor. This is also spelled Nefer Hor, Nephros or Nopheros (nfr ḥr.w) meaning ‘The Good Horus’.

The Eye of Horus is an ancient Egyptian symbol of protection and royal power from deities, in this case from Horus or Ra. The symbol is seen on images of Horus” mother, Isis, and on other deities associated with her.

God of war and hunting

Horus was also said to be a god of war and hunting. The Horus falcon is shown upon a standard on the predynastic Hunters Palette in the “lion hunt”. Thus he became a symbol of majesty and power as well as the model of the pharaohs. The Pharaohs were said to be Horus in human form. Furthermore, Nemty, another war god, was later identified as Horus.

Fragments of Book of the Dead found