Hathor and the Osiris Myth

Hathor is an ancient Egyptian goddess associated, later, with Isis and, earlier, with Sekhmet but eventually was considered the primeval goddess from whom all others were derived. She is usually depicted as a woman with the head of a cow, ears of a cow, or simply in cow form. In her form as Hesat she is shown as a pure white cow carrying a tray of food on her head as her udders flow with milk. She is closely associated with the primeval divine cow Mehet-Weret, a sky goddess whose name means “Great Flood” and who was thought to bring the inundation of the Nile River which fertilized the land.

After Set murdered Osiris and then hacked him into pieces, he scattered the body parts all across the land and flung some into the Nile. Isis gathered all the parts of her husband back together with the help of her sister Nephthys and brought Osiris back to life but he was incomplete because a fish had eaten his penis and it could not be restored. Isis then transformed herself into a kite (a falcon) and flew around Osiris’ body, drawing his seed into her and becoming pregnant with Horus. Osiris then descended into the underworld to become Lord of the Dead while Isis was left alone to raise her son and Set usurped Osiris’ place as king of the land.

Isis hid Horus from Set until the boy was grown; at which point Horus challenged Set for rule of the land. This struggle is sometimes represented as a battle but, in the story known as The Contendings of Horus and Set, it is a trial overseen by the Ennead, a tribunal of nine powerful gods, who are to decide who is rightful king. Chief among these gods is Hathor’s father Ra who, at one point becomes so upset with the proceedings, he refuses to participate. Geraldine Pinch relates the rest of the story:

Ra becomes angry when he is insulted by the baboon god Babi and lies down on his back. This implies that the creator sun god was sinking back into the inert state that would mean the end of the world. Hathor, Lady of the Southern Sycamore, visits her father and shows him her genitals. He immediately laughs, gets up, and goes back to administering justice. Hathor has aroused the sun god and driven away his evil mood (138).

Although clearly a sexual gesture, the abstract interpretation is of the importance of balance between the feminine and the masculine principles in maintaining order and harmony. Hathor reveals herself to her father in an unexpected gesture which lightens his mood and puts things in perspective. The balance between the duality of feminine and the masculine, between light and dark, fertility and aridity is emphasized throughout Egyptian culture in the gods and the myths relating to them. 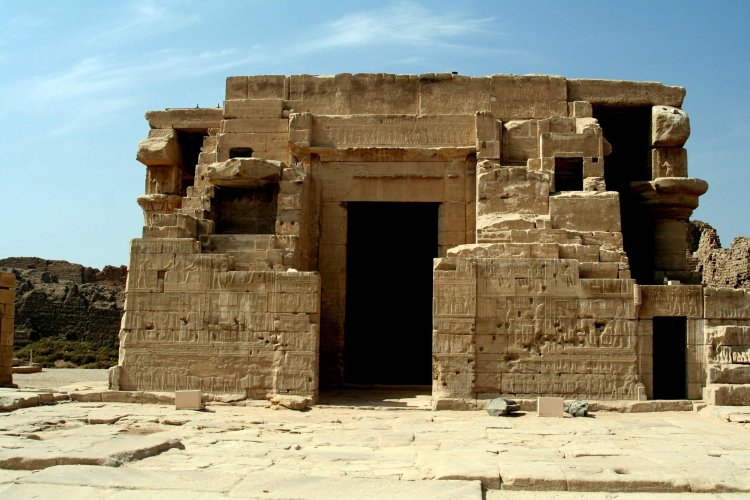 The Temple of Hathor at Dendera, Egypt, a famous center of her cult.

Another Myth… Hathor and the Eye of RA

This balance is seen in the concept of the Eye of Ra, the female counterpart to the male aspect of creation embodied in Ra. The Eye of Ra, like the Distant Goddess, was associated with a number of female deities but, again, often Hathor. Geraldine Pinch notes that “the ancient Egyptian word for eye (irt) sounded like a word for “doing” or “acting”. This may be why the eyes of a deity are associated with divine power at its most interventional. Since the word irt was feminine in gender, divine eyes were personified as goddesses” (128). The Distant Goddess story is actually an Eye of Ra story in that the feminine aspect of the divine goes forth, acts upon its environment, and returns to bring transformation.

This same pattern is seen in the creation tale featuring Atum (Ra) and the ben-ben when he sends his children out with his eye to create the world. Hathor was often referred to as “The Eye of Ra” or “The Eye of Atum” and her sun disk is often represented as an eye from which the sun is born. In the story of the sun god’s voyage through the night sky and the underworld, Hathor stands in the prow keeping watch for any sign of danger from Apophis. Throughout Egyptian history she was known as the daughter of Nut and Ra, Wife of Ra, mother of gods, and great Mother Goddess (perhaps related to the even older goddess Neith) so it is no surprise that popular stories such as the Distant Goddess or concepts like the Eye of Ra would tend to feature her. 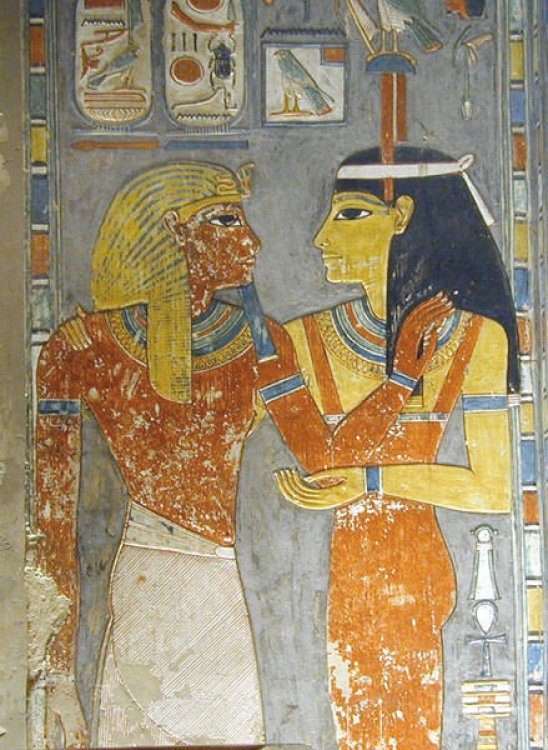 Some ancient stories depict her as the mother of Horus the Elder and others as the wife of Horus of Edfu, resulting in the birth of Horus the Younger who was later regarded as the son of Osiris and Isis. Hathor’s early identification as the mother of Horus, the god most closely associated with the ruler of Egypt, attests clearly to her importance prior to the rise in popularity of the Myth of Osiris when Isis became Horus’ mother. Hathor was worshipped in every region of Egypt before the ascent of Isis and her cult was popular with both the poor working class of Egypt and the ruling elite.