by TreasuresHunterOctober 1, 2017 in All Topics, Pharaohs,

Nut (Egyptian: Nwt, Pronounced “newt”), also known by various other transcriptions, is the goddess of the sky in the Ennead of ancient Egyptian religion. She was seen as a star-covered nude woman arching over the earth, or as a cow.

Goddess of the sky

Nut is a daughter of Shu and Tefnut. Her brother and husband is Geb. She had four or five children: Osiris, Set, Isis, Nephthys, and—in early Egyptian sources—Horus. She is considered one of the oldest deities among the Egyptian pantheon, with her origin being found on the creation story of Heliopolis. She was originally the goddess of the nighttime sky, but eventually became referred to as simply the sky goddess. Her headdress was the hieroglyphic of part of her name, a pot, which may also symbolize the uterus. Mostly depicted in nude human form, Nut was also sometimes depicted in the form of a cow whose great body formed the sky and heavens, a sycamore tree, or as a giant sow, suckling many piglets (representing the stars).

A sacred symbol of Nut was the ladder used by Osiris to enter her heavenly skies. This ladder-symbol was called maqet and was placed in tombs to protect the deceased, and to invoke the aid of the deity of the dead. Nut and her brother, Geb, may be considered enigmas in the world of mythology. In direct contrast to most other mythologies which usually develop a sky father associated with an Earth mother (or Mother Nature), she personified the sky and he the Earth. 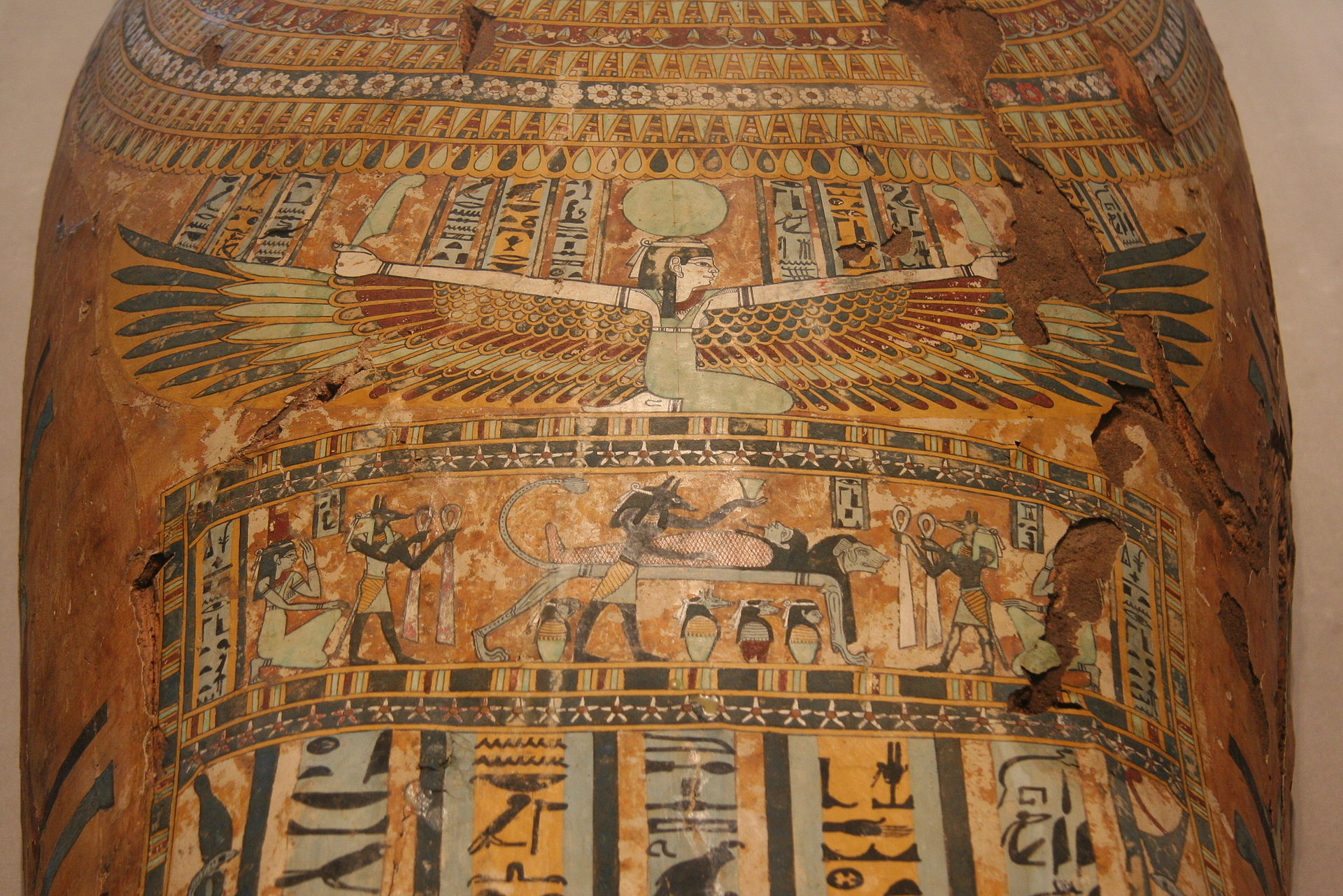 Great goddess Nut with her wings stretched across a coffin

Nut appears in the creation myth of Heliopolis which involves several goddesses who play important roles: Tefnut (Tefenet) is a personification of moisture, who mated with Shu (Air) and then gave birth to Sky as the goddess Nut, who mated with her brother Earth, as Geb. From the union of Geb and Nut came, among others, the most popular of Egyptian goddesses, Isis, the mother of Horus, whose story is central to that of her brother-husband, the resurrection god Osiris. Osiris is killed by his brother Set and scattered over the Earth in 14 pieces which Isis gathers up and puts back together. Osiris then climbs a ladder into his mother Nut for safety and eventually becomes king of the dead.

A huge cult developed about Osiris that lasted well into Roman times. Isis was her husband’s queen in the underworld and the theological basis for the role of the queen on earth. It can be said that she was a version of the great goddess Hathor. Like Hathor she not only had death and rebirth associations but was the protector of children and the goddess of childbirth.

Earth And Sky, GEB And NUT

Born as half a pair, locked with her brother and consort Geb, their embrace was so passionate that their own father, Shu the God of Air, had to separate them. And thus heaven and earth were created, with Nut the Sky, arched above her adoring husband, Geb the Earth.

Nut and Geb’s eternal love affair was consummated every night, when she would come down to earth for a few hours, causing darkness to fall.

From their love they spawned some of ancient Egypt’s greatest and most powerful deities, as well as the sun, the moon and the stars. 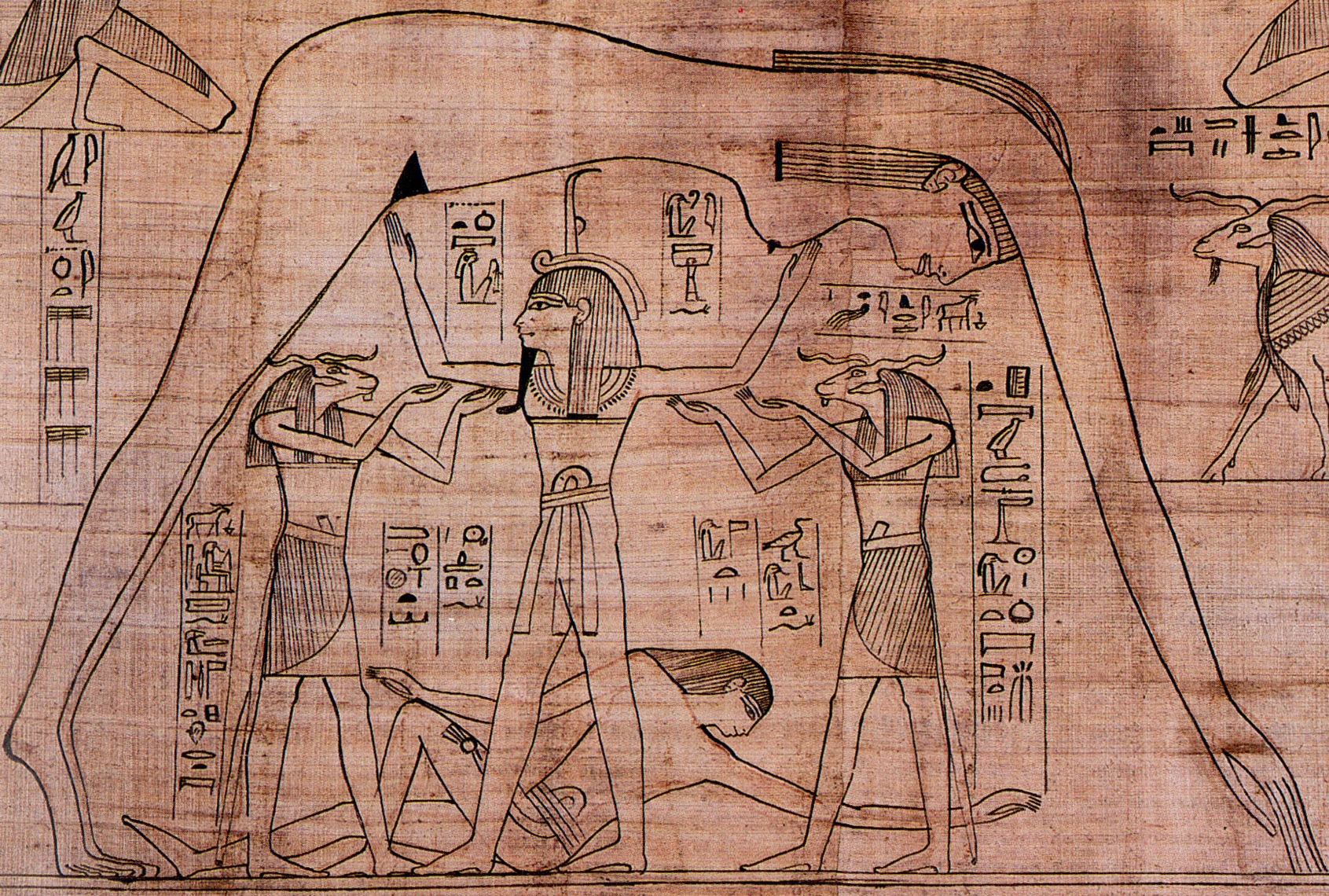 Nut, goddess of sky supported by Shu the god of air, and the ram-headed Heh deities, while the earth god Geb reclines beneath.

Myth of Nut and Ra

Ra, the sun god, was the second to rule the world, according to the reign of the gods. Ra was a strong ruler but he feared anyone taking his throne. When he discovered that Nut was to have children, he was furious. He decreed, “Nut shall not give birth any day of the year.” At that time, the year was only 360 days. Nut spoke to Thoth, god of wisdom, and he had a plan. Thoth gambled with Khonsu, god of the moon, whose light rivalled that of Ra’s. Every time Khonsu lost, he had to give Thoth some of his moonlight. Khonsu lost so many times that Thoth had enough moonlight to make 5 extra days. Since these days were not part of the year, Nut could have her children. She had five children: Osiris, later ruler of the gods and then god of the dead, Horus the Elder, god of war, Set, god of evil and wastelands, Isis, goddess of magic, and Nephthys, goddess of water. When Ra found out, he was furious. He separated Nut from her husband Geb for eternity. Her father, Shu, was to keep them apart. Nevertheless, Nut did not regret her decision.

Protectress Of the Journey to the AfterLife

Nut was the goddess of the sky and all heavenly bodies, a symbol of protecting the dead when they enter the afterlife. According to the Egyptians, during the day, the heavenly bodies—such as the sun and moon—would make their way across her body. Then, at dusk, they would be swallowed, pass through her belly during the night, and be reborn at dawn.

Nut is also the barrier separating the forces of chaos from the ordered cosmos in the world. She was pictured as a woman arched on her toes and fingertips over the earth; her body portrayed as a star-filled sky. Nut’s fingers and toes were believed to touch the four cardinal points or directions of north, south, east, and west.

Because of her role in saving Osiris, Nut was seen as a friend and protector of the dead, who appealed to her as a child appeals to its mother: “O my Mother Nut, stretch Yourself over me, that I may be placed among the imperishable stars which are in You, and that I may not die.” Nut was thought to draw the dead into her star-filled sky, and refresh them with food and wine: “I am Nut, and I have come so that I may enfold and protect you from all things evil. 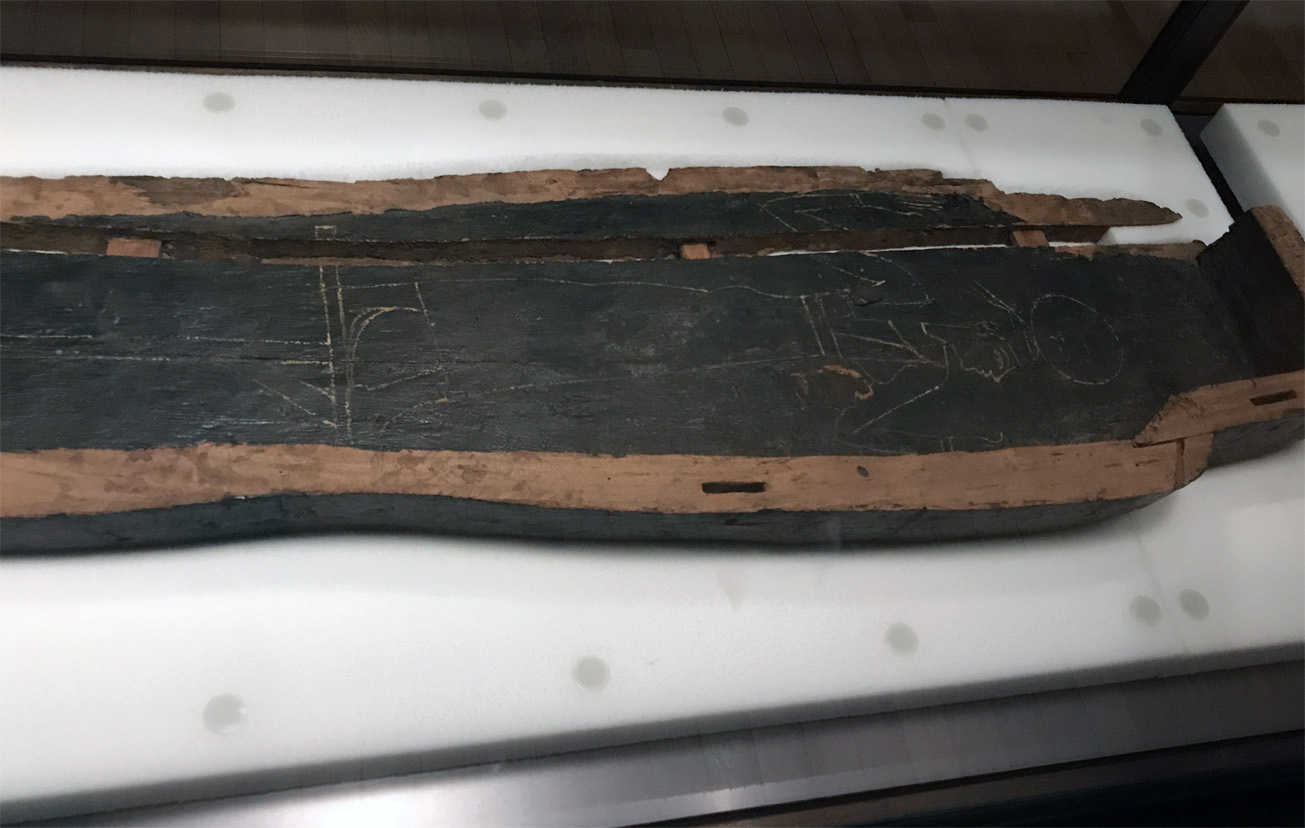 Goddess NUT (Newt) is printed on the inside lid of this sarcophagus, protecting the deceased. The dead would lie down in her arms as they journeyed safely to the next world. Sarcophagus on display at the American Museum of Natural History – Mummies Exhibition (AMNH).

She was often painted on the inside lid of the sarcophagus, protecting the deceased. The vaults of tombs were often painted dark blue with many stars as a representation of Nut. The Book of the Dead says, “Hail, thou Sycamore Tree of the Goddess Nut! Give me of the water and of the air which is in thee. I embrace that throne which is in Unu, and I keep guard over the Egg of Nekek-ur. It flourisheth, and I flourish; it liveth, and I live; it snuffeth the air, and I snuff the air, I the Osiris Ani, whose word is truth, in peace.”

(Source on Into % Origins: wikipedia)