Dendera Temple complex (Ancient Egyptian: Iunet or Tantere; the 19th-century English spelling in most sources, including Belzoni, was Tentyra) is located about 2.5 kilometres (1.6 mi) south-east of Dendera, Egypt. It is one of the best-preserved temple complexes in Egypt. The area was used as the sixth Nome of Upper Egypt, south of Abydos.

The whole complex covers some 40,000 square meters and is surrounded by a hefty mud brick enclosed wall. Dendera was a site for chapels or shrines from the beginning of history of ancient Egypt. It seems that pharaoh Pepi I (ca. 2250 BC) built on this site and evidence exists of a temple in the eighteenth dynasty (ca 1500 BC). However, the earliest extant building in the compound today is the Mammisi raised by Nectanebo II – last of the native pharaohs (360–343 BC). The features in the complex include:

Visitors to Luxor, who have the time, should try and visit the famous Temple of Hathor at Dendera. In a taxi, the trip takes about 1hour from Luxor. The buses, which are always accompanied by a Police convoy, that leaves at 0800 daily . The entrance fee is LE 35.

The Temple is located about 4KM from the River Nile, on its west bank, roughly opposite the city of Qena, the capital of the province and governorate of Qena (population – 2,000,000), which is inhabited by both Coptic and Muslims. This town is very famous for the manufacture of water pots, called “gula” jars in Arabic.

The Muslim Sheik, Abdel Raheeem El-Kenawi, who spent all of his life in this town and died in 1170 A.D, founded the modern city. The birthday of this saint is celebrated every year, and a great number of pilgrims come from all over Egypt for the festivities. The name of the city goes back to the time of the Pharaohs , and was taken from the ancient Egyptian word Qeny, which means, “to bend”; the River Nile has a huge (and famous) bend here.

The Temple of Hathor was built in the 1st century B.C and it is one of the best-preserved Temples in the whole of Egypt! Ptolemy VIII and Queen Cleopatra II built it, and then later, Roman Emperors continued to decorate it and honour the Goddess Hathor; the Goddess of maternity, love and music. The Greeks identified the Goddess Hathor as Aphrodite. 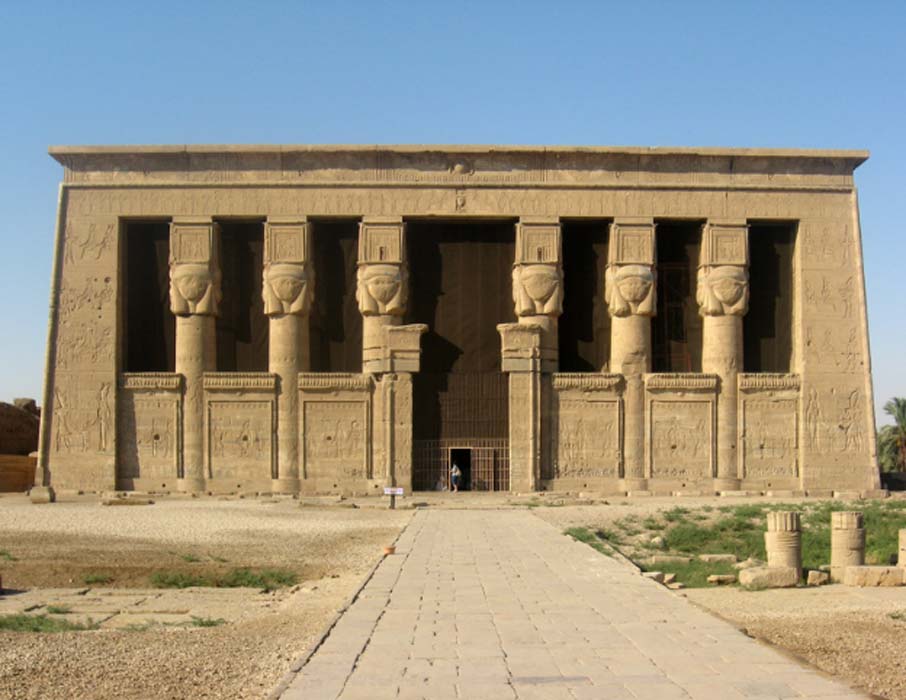 The first gateway, built by Roman Emperor Domitian in 80 A.D, leads to the great hall of the Temple, which is decorated with Hathoric columns (columns with the face of Hathor on them) and is in a very good condition. The upper, front edge of the cornice is decorated with the winged sun disc, while stone screens between the columns and the scene, which represent the Roman Emperor Tiberius and other Roman rulers who present votive offerings to the Goddess of the Temple, enclose the front portion. Hathor is chiefly represented with the horns of the sacred cow protruding from her head, supporting the solar disc of the sun, and in her hands she is holding an “Ankh”, the symbol of life, and a sceptre. Sometimes she is also represented with the head of a cow.

The interior walls of the great hall have remarkable scenes that mainly depict sacrifices being made to the Goddess of the Temple. The amazing ceiling, with its astronomical representations, is very interesting! The ceiling is divided into 7 divisions, and the best remaining 3 are:

The first division on the eastern side, which depicts the Goddess Nut, the Goddess of the sky, who is bending herself towards the earth, with the sun disc shining on the Temple and the mask of Hathor.

Secondly, and next to the first, is a representation of the sun boat and star Goddess. 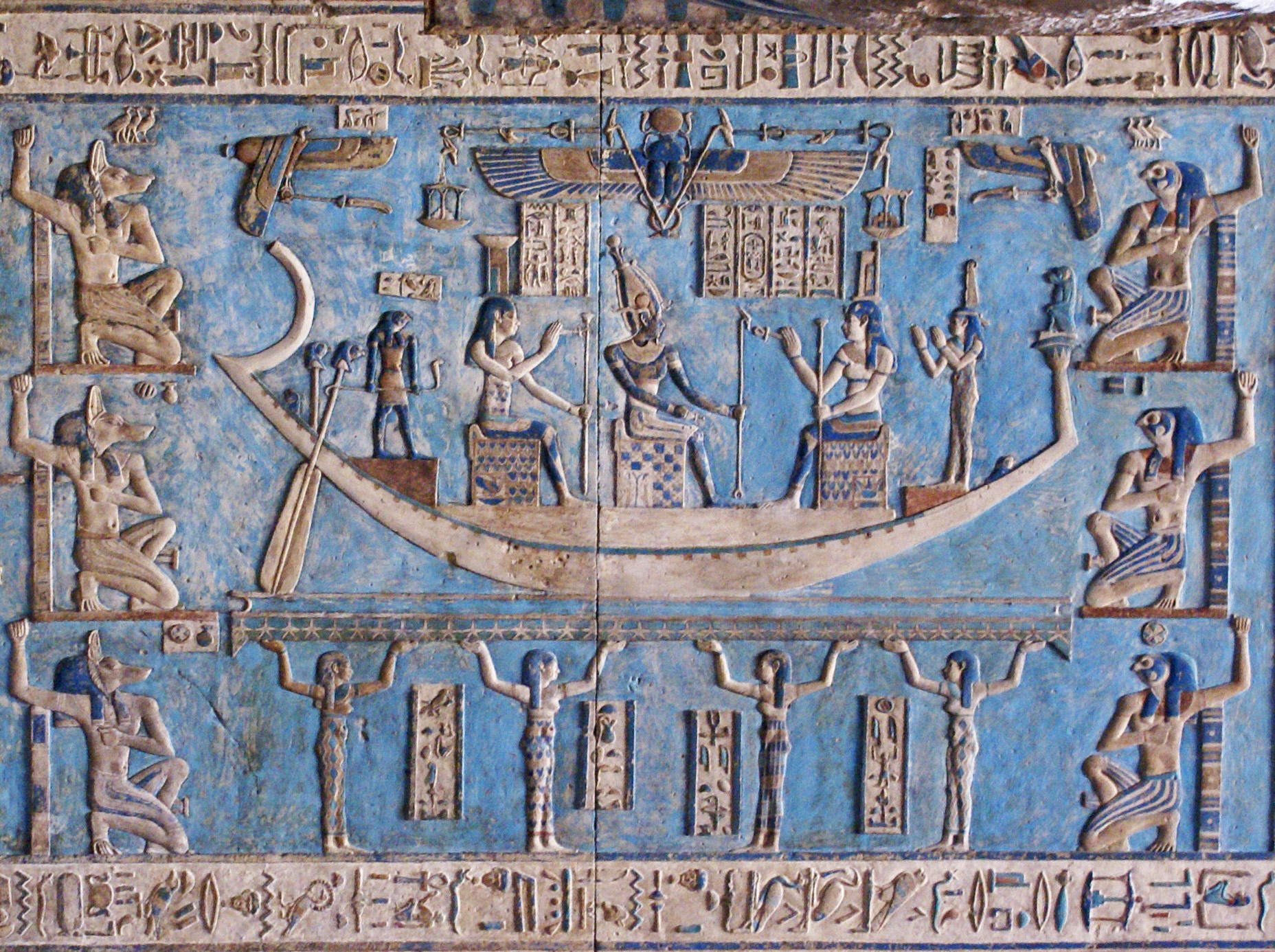 The sun boat and the Star Goddess

The third one is the western ceiling, which shows a perfect representation of the zodiac signs, which is one of the reasons that the Temple is so famous (the original zodiac relief is now in the Louvre museum in Paris, France). The 12 figures of the ram, the bull, the heavenly twins, the crab, the lion, the virgin, the scales, the scorpion, the archer, the goat, the watering pots and fishes with glittering tails. On the inner walls of the screen, the hawk headed God Horus, and the Ibis headed God Thoth, are pouring drops of holy water over the King. This scene is called the baptism scene, symbolising life and happiness.

The second hall has 6 columns adorned with rich capitals and granite pedestals. On both sides of this hall are small rooms that were used as storerooms, used to store the wine jars that came from the Island of Crete, and the fertile Fayoum and Kharga oases.

Next is the central chapel, which has two altars; one for the sacred boat, and the other for the sacrifices offered to the Goddess Hathor. The beautifully sculptured relief’s on the walls of the shrines represent Ptolemy VIII and other rules, whose names were left blank in the oval cartouches, dancing with offerings to the sacred boat of Hathor and her husband Horus. The representatives of the King, the high Priests and noblemen, used to gather in the great hall in preparation for the daily rituals. The ceilings are covered in stars, and black soot from the fires of the later inhabitants of the Temple.The rooms around the sanctuary were used for scientific purposes, the storing of the sacred boat, the sacred wreath, the golden image of the Goddess Hathor and musical instruments

There is a small corridor on the right, which leads to a small room that contains the crypt, highly recommended should you visit here.

The staircases, which lead to the roof of the Temple, are decorated with some beautiful symbols representing the 12 months of the year. On the eastern corner, of the roof, is the chapel of the God Osiris. The scenes on its walls represent Osiris rising from the dead and becoming the God of the underworld. It is from this chapel that the best representation of the zodiac was taken. 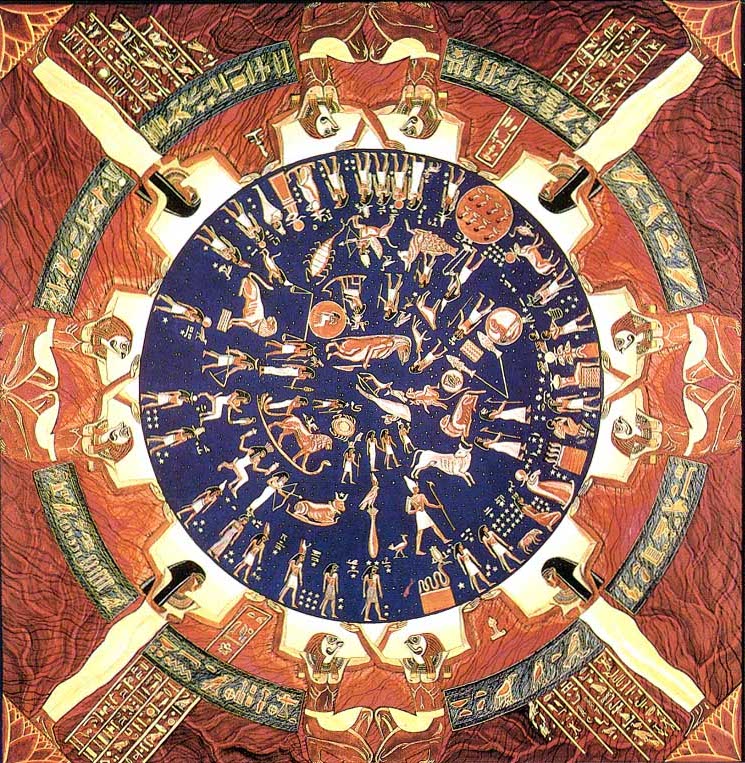 The most preserved, magnificent zodiac relief

The southern exterior wall relief show Cleopatra VII and her son Caesarian, son of JuliusCaesar, making offerings to Hathor and allthe other deities of Dendera. On the same wall, near the cornice, are some stone lion heads, serving as water spouts. Adjoining the Temple building to the west is the sacred lake, which was used for the priests’ ablutions. Next to the lake is a small shaft, discovered in 1917, which contained valuable treasures of Cleopatra’s era, which are now displayed in the Egyptian Museum.

Around the Temple are the remains of the mud brick wall, which surrounded the whole Temple, as well as the ruins of Coptic houses and churches, including a large number of Coptic crosses, which were chiseled into the stones. To the north lies the Mamisi, the birth house of Horus, the son of Isis and Osiris, which was erected by the Roman Emperor Trajan in 90 A.D. This little Temple is surrounded by a row of columns, with different capitals embellished with relief images of the God Bes, the chief God of childhood who drove evil spirits away from the babies. Bes is a hideous dwarf, with a big stomach and long whiskers.