Anubis is one of the most prominent and mystical gods of ancient Egypt. He was known since the earliest periods in the history of the civilization that was based near the Nile River.

Anubis (/əˈnuːbɪs/ or /əˈnjuːbɪs/;[2] Ancient Greek: Ἄνουβις, Egyptian: jnpw, Coptic: ⲁⲛⲟⲩⲡ Anoup) is the Greek name of a god associated with mummification and the afterlife in ancient Egyptian religion, usually depicted as a canine or a man with a canine head. Archeologists identified the sacred animal of Anubis as an Egyptian canid, that at the time was called the golden jackal, but recent genetic testing has caused the Egyptian animal to be reclassified as the African golden wolf. 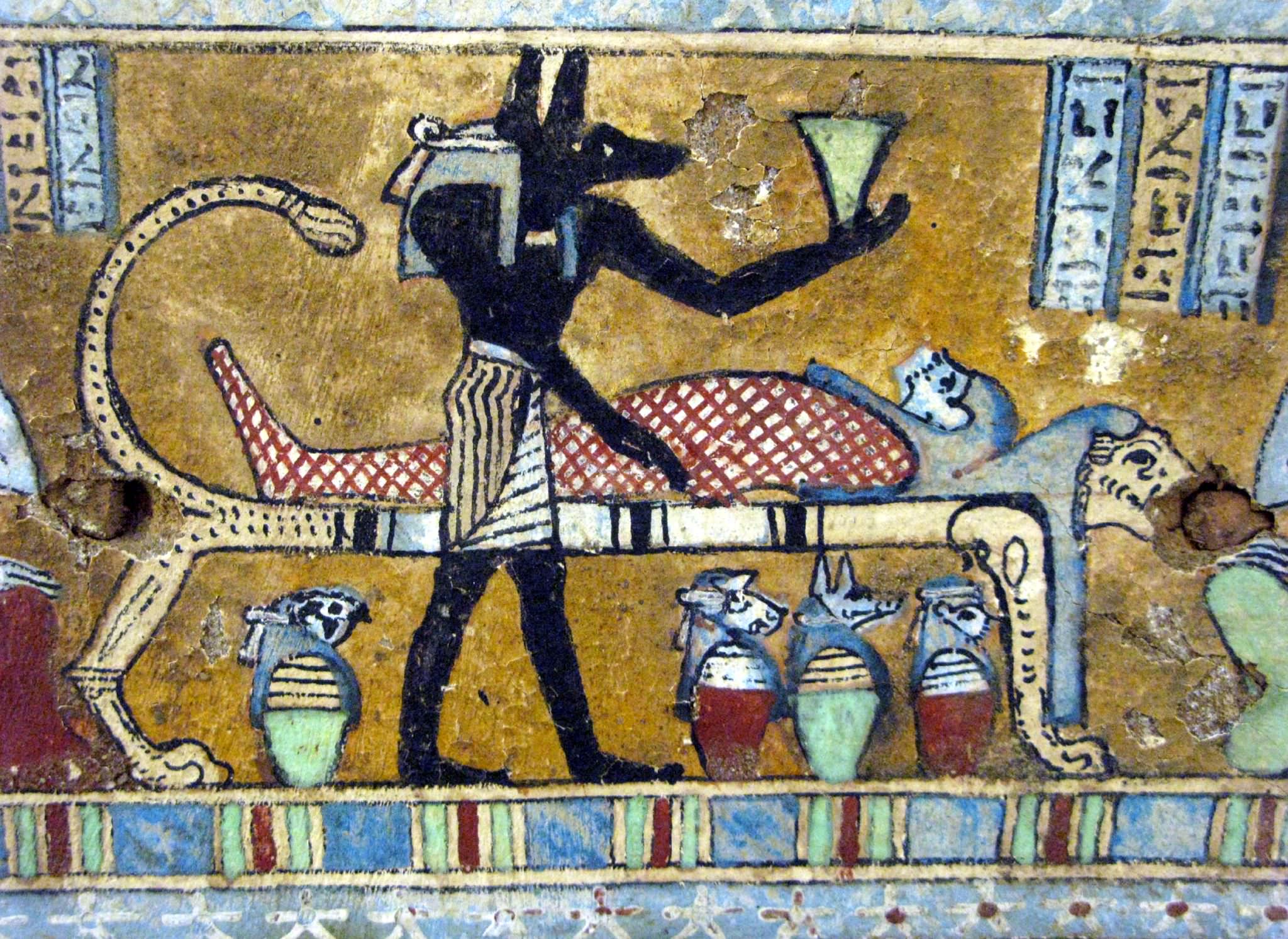 A scene from a wooden Egyptian sarcophagus depicting Anubis, the god of mummification and the afterlife.

Anubis is the Egyptian god of mummification and the afterlife as well as the patron god of lost souls and the helpless. He is one of the oldest gods of Egypt, who most likely developed from the earlier (and much older) jackal god Wepwawet with whom he is often confused. Anubis’ image is seen on royal tombs from the First Dynasty of Egypt (c. 3150-2890 BCE) but it is certain he had already developed a cult following prior to this period in order to be invoked on the tomb’s walls for protection. He is thought to have developed in response to wild dogs and jackals digging up newly buried corpses at some point in the Predynastic Period in Egypt (c. 6000-3150 BCE) as the Egyptians believed a powerful canine god was the best protection against wild canines.

He is depicted as a black canine, a jackal-dog hybrid with pointed ears, or as a muscular man with the head of a jackal. The color black was chosen for its symbolism, not because Egyptian dogs or jackals were black. Black symbolized the decay of the body as well as the fertile soil of the Nile River Valley which represented regeneration and life. The powerful black canine, then, was the protector of the dead who made sure they received their due rights in burial and stood by them in the afterlife to assist their resurrection. He was known as “First of the Westerners” prior to the rise of Osiris in the Middle Kingdom (2040-1782 BCE) which meant he was king of the dead (as “westerners” was the Egyptian term for departed souls in the afterlife which lay westward, in the direction of sunset). In this role, he was associated with eternal justice and maintained this association later, even after he was replaced by Osiris who was then given the honorary title ‘First of the Westerners’.

In earlier times, Anubis was considered the son of Ra and Hesat (associated with Hathor), but after his assimilation into the Osiris myth he was held to be the son of Osiris and his sister-in-law Nephthys. He is the earliest god depicted on tomb walls and invoked for protection of the dead and is usually shown tending to the corpse of the king, presiding over mummification and funerals, or standing with Osiris, Thoth, or other gods at the Weighing of the Heart of the Soul in the Hall of Truth in the afterlife. A popular image of Anubis is the standing or kneeling man with the jackal’s head holding the golden scales on which the heart of the soul was weighed against the white feather of truth. His daughter is Qebhet (also known as Kabechet) who brings cool water to the souls of the dead in the Hall of Truth and comforts the newly deceased. Anubis’ association with Nephthys (known as “Friend to the Dead”) and Qebhet emphasizes his long-standing role as protector of the dead and a guide for the souls in the afterlife.

Weighing of the heart scene, with en:Ammit sitting, from the book of the dead of Hunefer.

The name “Anubis” is the Greek form of the Egyptian Anpu (or Inpu) which meant “to decay” signifying his early association with death. He had many epithets besides “First of the Westerners” and was also known as “Lord of the Sacred Land” (referencing the area of the desert where necropoleis were located), “He Who is Upon his Sacred Mountain” (referencing the cliffs around a given necropolis where wild dogs and jackals would congregate), “Ruler of the Nine Bows” (a reference to the phrase used for traditional enemies of Egypt who were represented as nine captives bowing before the king), “The Dog who Swallows Millions” (simply referring to his role as a god of death), “Master of Secrets” (since he knew what waited beyond death), “He Who is in the Place of Embalming” (indicating his role in the mummification process), and “Foremost of the Divine Booth” referencing his presence in the embalming booth and burial chamber.

As his various epithets make clear, Anubis was central to every aspect of an individual’s death experience in the role of protector and even stood with the soul after death as a just judge and guide. Scholar Geraldine Pinch comments on this, writing, “Anubis helped to judge the dead and he and his army of messengers were charged with punishing those who violated tombs or offended the gods” (104). He was especially concerned with controlling the impulses of those who sought to sow disorder or aligned themselves with chaos. Pinch writes:

“A story recorded in the first millenium BCE tells how the wicked god Set disguised himself as a leopard to approach the body of Osiris. He was seized by Anubis and branded all over with a hot iron. This, according to Egyptian myth, is how the leopard got its spots. Anubis then flayed Set and wore his bloody skin as a warning to evildoers. By this era, Anubis was said to command an army of demon messengers who inflicted suffering and death.” 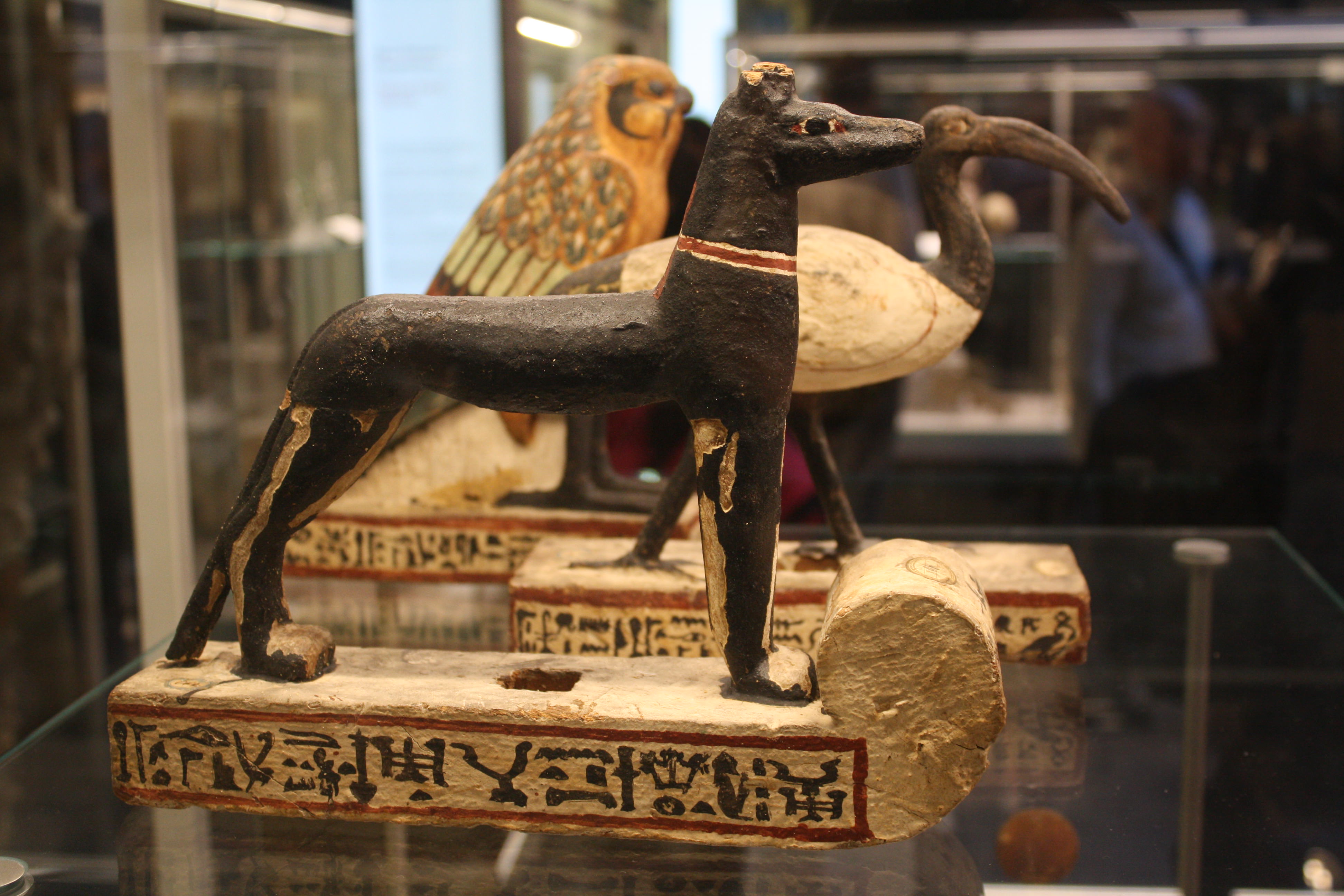 Wooden figures of the Egyptian gods Anubis (jackal), Thoth (ibis), and Horus (falcon). Holes in their bases suggest they were carried on poles as standards for use during funeral processions. Ptolemaic Period, 3rd-2nd century BCE. (Egyptian Museum, Turin)

In the Early Dynastic Period (c. 3150-2613 BCE) and Old Kingdom (c. 2613-2181 BCE) Anubis was the sole Lord of the Dead and righteous judge of the soul, but as the Osiris myth became more popular, the latter god took on more and more of Anubis’ attributes. Anubis remained a very popular god, however, and so was assimilated into the Osiris myth by discarding his earlier parentage and history and making him the son of Osiris and Nephthys born of their affair. According to this story, Nephthys (Set’s wife) was attracted by the beauty of Osiris (Set’s brother) and transformed herself to appear to him as Isis (Osiris’ wife). Osiris slept with Nephthys and she became pregnant with Anubis but abandoned him shortly after his birth in fear that the affair would be discovered by Set. Isis found out about the affair and went searching for the infant and, when she found him, adopted him as her own. Set also found out about the affair, and this is given as part of the reason for his murder of Osiris.

After his assimilation into the Osiris myth, Anubis was regularly seen as Osiris’ protector and “right-hand man” who guarded the god’s body after death, oversaw the mummification, and assisted Osiris in the judgment of the souls of the dead. Anubis was regularly called upon (as attested to from amulets, tomb paintings, and in written works) for protection and vengeance; especially as a powerful ally in enforcing curses placed on others or defending one’s self from such curses.

Although Anubis is very well represented in artwork throughout Egypt’s history he does not play a major role in many myths. His early role as Lord of the Dead, prior to assimilation into the Osiris myth, was static as he only performed a single solemn function which did not lend itself to elaboration. As the protector of the dead, who invented mummification and so the preservation of the body, he seems to have been considered too busy to have involved himself in the kinds of stories told about the other Egyptian gods. Stories about Anubis are all along the lines of the one Geraldine Pinch relates above.

The priests of Anubis were male and often wore masks of the god made of wood in performing rituals. The god’s cult center was in Upper Egypt at Cynopolis (“the city of the dog”), but there were shrines to him throughout the land and he was universally venerated in every part of the country.Scholar Richard H. Wilkinson writes:

“The chapel of Anubis in the temple of Hatshepsut at Deir el-Bahri may have given continuity to an earlier shrine of the god in that area and provides an excellent example of the continuing importance of the god long after his assimilation into the cult of Osiris. Because he was said to have prepared the mummy of Osiris, Anubis became the patron god of embalmers and in the Memphite necropolis an area associated with the embalmers seems to have become something of a focal point for the cult of Anubis in the Late Period and Ptolemaic times and has been termed ‘the Anubeion’ by modern Egyptologists. Masks of the god are known, and priests representing Anumbis at the preparation of the mummy and the burial rites may have worn these jackal-headed masks in order to impersonate the god; they were certainly utilized for processional use as this is depicted representationally and is mentioned in late texts. The many two- and three-dimensional representations of Anubis which have survived from funerary contexts indicate the god’s great importance in this aspect of Egyptian religion and amulets of the god were also common. “

Although he does not play a major role in many myths, his popularity was immense, and as with many Egyptian deities, he survived on into other periods through association with the gods of other lands. The Greeks associated him with their god Hermes who guided the dead to the afterlife and, according to Egyptologist Salima Ikram,

[Anubis] became associated with Charon in the Graeco-Roman period and St. Christopher in the early Christian period…It is probable that Anubis is represented as a super-canid, combining the most salient attributes of serveral types of canids, rather than being just a jackal or a dog.

This “super-canid” offered people the assurance that their body would be respected at death, that their soul would be protected in the afterlife, and that they would receive fair judgment for their life’s work. These are the same assurances sought by people in the present day, and it is easy to understand why Anubis was such a popular and enduring god. His image is still among the most recognizable of all the Egyptian gods, and replicas of his statuary and tomb paintings remain popular, especially among dog owners, in the modern day.