Ahmose I (Egyptian: Jˁḥ ms(j.w), sometimes written Amosis I, “Amenes” and “Aahmes” and meaning Born of Iah[5]) was a pharaoh of ancient Egypt and the founder of the Eighteenth dynasty. He was a member of the Theban royal house, the son of pharaoh Seqenenre Tao and brother of the last pharaoh of the Seventeenth dynasty, King Kamose. During the reign of his father or grandfather, Thebes rebelled against the Hyksos, the rulers of Lower Egypt. When he was seven years old his father was killed,[6] and he was about ten when his brother died of unknown causes, after reigning only three years. Ahmose I assumed the throne after the death of his brother,[7] and upon coronation became known as Neb-Pehty-Re (The Lord of Strength is Re). The name Ahmose is a combination of the divine name ‘Ah’ (see Iah) and the combining form ‘-mose’.

Egypt’s 18th Dynasty that established the New Kingdom is, to most people interested in Egypt, a dynasty of stars. It is the dynasty of Tutankhamun who was a fairly minor king, but perhaps the best known of any of the pharaohs. It was also the dynasty of the well known Akhenaten, and of Queen Hatshepsut.

The founder of this Dynasty is less well known to the general public, but unquestionably of major importance to Egyptian history. He was Ahmose I, during who’s reign Egypt was finally and completely liberated from the Hyksos. Various scholars attribute different dates to his reign, but he probably became ruler of Egypt around 1550 BC at the age of 10, and ruled for a period of around 25 years before his death (examination of his well preserved mummy suggest he was about 35 when he died).

Ahmose I (Amosis to the Greeks) was given the birth name Ah-mose (The Moon is Born). His thrown name was Neb-pehty-re (The Lord of Strength is Re). He was probably a boy when he assumed the thrown, having lost his father Seqenenre Taa II and his brother Kahmose within three years of each other. His mother was Queen Ashotep, a powerful woman who was perhaps his co-regent during his early years.

Egyptologists believe that during his very early reign, little was probably accomplished and perhaps the Hyksos may have even gained some ground, recapturing Heliopolis. However, by the end of his first decade in power, we know from an Autobiography of Ahmose, son of Ibana, a naval officer from El-Kab, that he laid siege on Avaris (The tomb of Ahmose Pennekheb, another soldier also records the campaigns). This was a long battle interrupted by the need to put down insurrections in already liberated territories, but appears to have been successful sometime between his 12th and 15th year as ruler. Afterwards, he attacked the southwest Palestinian fortress of Sharuhen in a six year siege that would finally put an end to Hyksos control of Egypt. 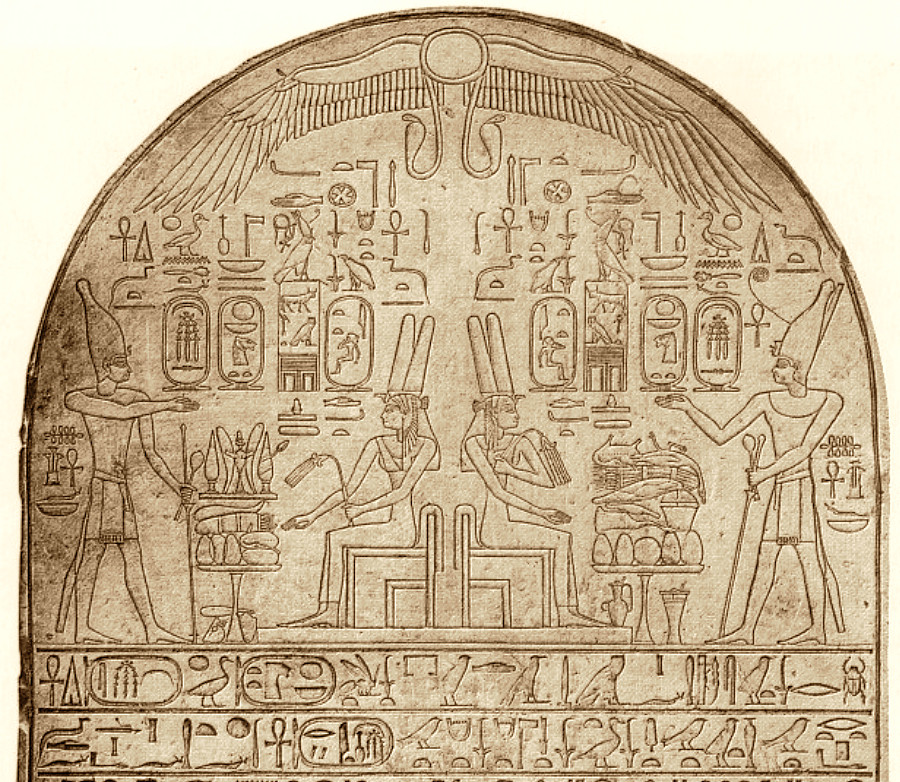 Stele of Ahmose I – Egyptian_Museum

Next, he turned his attention to Nubia (Kush) and, while Kamose (his predecessor) may have gained some ground prior to his death, Ahmose I pushed the boundaries south to the Second Cataract. Here, he established a new civil administration at Buhen probably initially headed by a Viceroy named Djehuty.

Apparently, while Ahmose I was in Nubia, former Hyksos allies again attempted a few uprising in the north lead by an arch enemy of Kamose named Teti-en. In this instance, Ahmose I’s mother, Ahhotpe, was probably responsible for putting down the rebellion and for this she was awarded the gold flies, an award for valor that was found on her mummy in her intact tomb at Thebes.

After Ahmose I’s campaigns in Nubia, he once again returned to Palestine during his 22nd year in power and may have fought his way as for as the Euphrates, according to information on a stela of Tuthmosis I.

Ahmose I married his sister, Ahmose-Nefertiri, who became Egypt’s first great God’s Wife of Amun, and had a number of children including:

We also know from Ahmose, son of Ibana that he supported his reign and rewarded local princes who had supported the Theban cause during the Second Intermediate Period by gifts of land (as recorded in Ahmose, son of Ibana’s tomb at el-Kab). We also know that he initiated some temple building projects, notably at Abydos. However, though we know he reopened the Tura limestone quarries, little survives of his construction apart form a few additions to the temples of Amun and Montu at Karnak. However, a recent Dutch-Egyptian team of archaeologists believe they may have unearthed the remains of Ahmose’s palace in the Al-Dabaa area in the Sharqiya Governorate of Egypt, a location that was probably the ancient Hyksos capital.

He was buried in the Dra Abu el-Naga area, but his tomb has yet to be found. His actual mummy was found in the Deir el-Bahari cache. He did have a cenotaph at South Abydos, consisting of a cliff temple and a pyramid and temple on the edge of the Nile valley. The pyramid which measures about 70 meters square is the last known royal example built in Egypt. Some battle scene decorations within the pyramid may have depicted his wars with the Hyksos. In these scenes are some of the earliest representation of horses in Egypt.