Abu Simbel, Aswan, Upper Egypt – Not only are the two temples at Abu Simbel among the most magnificent monuments in the world but their removal and reconstruction were a historic event in itself. When the temples (280 km from Aswan) were threatened by submersion in Lake Nasser, due to the construction of the High Dam, the Egyptian Government secured the support of UNESCO and launched a worldwide appeal. During the salvage operation which began in 1964 and continued until 1968, the two temples were dismantled and raised over 60 meters up the sandstone cliff where they had been built more than 3,000 years before. Here they were reassembled, in the exact same relationship to each other and the sun, and covered with an artificial mountain. Most of the joins in the stone have now been filled by antiquity experts, but inside the temples, it is still possible to see where the blocks were cut. You can also go inside the man-made dome and see an exhibition of photographs showing the different stages of the massive removal project.

Abu Simbel was first reported by J. L. Burckhardt in 1813, when he came over the mountain and only saw the facade of the great temple as he was preparing to leave that area via the Nile. The two temples, that of Ramesses II primarily dedicated to Re-Harakhte, and that of his wife, Nefertari dedicated to Hathor, became a must-see for Victorians visiting Egypt, even though it required a trip up the Nile, and often they were covered deeply in the sand, as they were when Burckhardt found them.

The monuments at Abu Simbel were practically unknown in the Egyptological world until Johan Ludwig Burckhardt visited the site in 1813 when he saw the upper part of a temple façade almost covered by sand. Giovanni Battista Belzoni visited the site shortly afterward in 1817 and discovered the entrance door. Since that time many adventurers have been struck by the awe-inspiring façade of the temple built by Rameses II around 3000 years ago with its giant colossal statues of the king sculpted from the mountain rock.

In the 1960s the new High Dam was built at Aswan which resulted in a build-up of water which threatened to engulf the monuments along its Nubian shores. In a dramatic race against time, UNESCO began a US$40 million rescue operation in 1964, the like of which had never been seen before. In the incredible salvage operation the temples were dismantled and cut up into manageable-sized blocks, then painstakingly reconstructed 65m higher than the original site, away from the dangers of the encroaching water. Inside a specially constructed mountain, two gigantic reinforced concrete domes protect the rebuilt temples.

Visitors to the temples today are easily able to forget that they are not in their original position. Such great care was taken in the landscaping and orientation of the monuments and it is only the fact that one may enter the artificial dome to view its construction which reminds us that the site of Rameses’ temple has now vanished below the waters of the lake. Each evening there are three performances of a Sound and Light Show in seven different languages.

The Great Temple of Rameses II 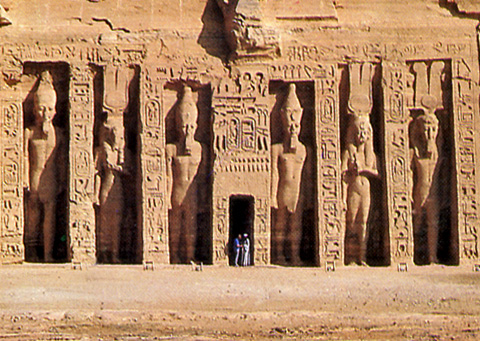 The façade of the Temple of Rameses II is dominated by four colossal seated statues carved out of the cliff face, each 20m high and depicting the king, with Nubians carved in the base at his feet. The faces of the statues appear to show Rameses in different stages of his life, although it is thought that the temple was built quite early in his reign. The figures are immense when you are standing at their base looking up at them. Rameses the Great obviously did not want to be forgotten when he built this Nubian Temple.

His mother Tuya, his Chief Wife Nefertari and some of his many children can be seen on a smaller scale at his feet. The monument is dedicated to the gods Re-Horakhty, Amun, and Ptah, as well as the divine Rameses himself. There are later inscriptions carved on the statues. A Greek inscription by the soldiers of Psamtek II of Dynasty XXVI is carved on the most ruined of the colossi.

Above the entrance door, the king worships the figure of the falcon-headed sun god Re-Horakhty who is also greeted by carved baboons on top of the wall. Inside, the temple is conventional in its design, with the floor level rising noticeably towards the sanctuary at the rear and in the first pillared hall there are eight Osiris pillars in two rows. On the left, the colossal statues depict Rameses wearing the white crown of Upper Egypt and on the right, the king wears the double crown of the Two Lands. On the walls of this first hypostyle hall are scenes showing the king’s victories over his enemies, usually Libyans and Nubians. The north wall is painted with scenes of the battle of Kadesh, Rameses’ greatest victory, and on the other walls are various depictions of the king in single combat or being presented with prisoners from various lands. The goddess Nekhbet on the ‘vulture ceiling’ leads us inwards towards the Vestibule.

The Vestibule is a chamber with four square columns showing Rameses and Nefertari offering to the gods, and other religious scenes. There are various magazines and storerooms leading off to each side which would once have housed the temple’s cultic objects and treasures which may have included a tribute from Nubia. Beyond the Vestibule, 65m in from the entrance to the temple, we come to the most sacred place, the Holy of Holies or Sanctuary. Four seated statues of Re-Horakhty, the deified Rameses II, Amun-re and Ptah are carved from the rock of the back wall. A pedestal still remains in the sanctuary on which the sacred barque would have stood. The temple was aligned so that twice a year, on February 22 and October 22, the sun’s rays penetrate the length of the temple and flood the sanctuary with light (which may or may not be significant!).

The decoration of the Great Temple of Rameses II at Abu Simbel serves to glorify the divine pharaoh Rameses, who is seen adoring and making offerings to his deified image. Perhaps it was also a monument intended to keep the wayward Nubian population in line by showing them the might of their great Egyptian ruler.

The Temple of Hathor

The second rock-cut temple at Abu Simbel lies close by to the north of the Great Temple and is similar in plan but on a smaller scale. It was built in honour of Rameses’ Great Wife and most favored of his consorts, Nefertari. This smaller monument is dedicated to the goddess Hathor. The façade of the temple shows Nefertari on each side of the entrance standing between two colossal 10m statues of Rameses, again with smaller images of royal children at their feet. Never before had a queen been depicted alongside her husband and on the same scale, on the façade of a temple.

The temple interior is very simple and built on a much more human scale than the Great Temple. Scenes on the walls of the pillared hall depict Nefertari taking part in divine rituals with her husband before Hathor and Mut and in the same role as the king. They also show the consecration of Nefertari as divine queen. There are traditional scenes of the pharaoh Rameses II in his warrior role of slaying captives. Six square pillars set in two rows and crowned with Hathor heads give a very gentle and feminine feel to the monument.

In the sanctuary at the rear of the temple, a statue in high relief seems to grow out of the rock wall, showing Hathor as the sacred cow-goddess emerging from the Western Mountain.

Chambers open to the north and south of the Vestibule with colorful scenes showing Hathor on her sacred barque. The side chambers have a cave-like feel, being carved from the mountain rock.

If the visitor has time, there are also other monuments to be seen at the Abu Simbel site. A number of carved stones documenting Nubian officials have been set into the base of the cliff. There is also the remains of a sun-court to be seen to the north of the Great Temple and nearby is the famous ‘Marriage Stela’ which tells of the marriage alliance between Rameses II and a daughter of a Hittite king.

The town of Abu Simbel is situated about 275km south of Aswan on the western shore of Lake Nasser and 50km from the border between Egypt and Sudan. It can be reached by air from Cairo, Luxor or Aswan. The desert road was closed for a few years and only officially re-opened recently. It may be possible to travel by air-conditioned coach or a taxi across the Nubian desert from Aswan, which would require police permission and means going as part of a convoy.

The journey by coach takes around 3½ hours – a spectacular way to see the Nubian desert and the sunrise. The site can also be visited as part of a Lake Nasser cruise.